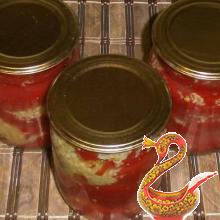 Pepper marinated with garlic in the winter is very fond of my wife. She prepares him, and I do all the "dirty work", like clean ingredients or something, bring submit.

But today, my responsibilities have expanded, and my familiar, added two more: rent-trim all these photos and write as much as possible a detailed recipe to even "maker" was able to repeat it. And I think I have it bad happened, so your court provides detailed step by step the technology of how to prepare the pickled peppers and garlic.
To make it, you will need:
• Pulpy pepper, weighing about three pounds,

• One liter of water,

• and one hundred grams of salt.

• In addition it will need three things hot pepper, preferably more of the same color, that he himself bell pepper,

That's all, proceed directly to the cooking.
Of water, salt, sugar, vinegar and oil do marinade. And immediately put it to boil in a small not, and a large pan, volume three ... four liters.
And while it begins to boil, let us study vegetables. Chilli clean from the most "evil" of the core (seeds and white inner part) and finely cut.

and bell pepper cleaned from inedible core most delicately him to stay as much as possible the whole, a kind of "pocket".

Marinade boil. Three ... five (depending on the meatiness of the pepper) minutes omit it and turned up. It should be soft. Take out and lay the next batch, because at a time breaks in the pan just three ... four major perchiny, so you get a kind of "kitchen pipeline."

Lay in each of them a mixture of garlic and hot pepper and upihivaem their banks. When it cools down, feel free to insert another perchinu, they sat down and now lie more tightly.

Drain marinade back into the pan and put it to boil. If the remaining filling (rarely even my wife get it evenly) - lay it on the banks,

Pour the marinade and roll them tight lids.

Store at room temperature is possible, it is desirable - in out of direct sunlight. But until the moment you open the first jar of pepper, marinated with garlic, must pass at least a month. So the taste will be more complete and rich.
That's all, enjoy your appetite.