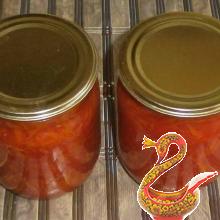 This dressing for borscht, which in fact I use to much larger quantities of food, which are tomatoes and carrots, for me is a kind of "magic wand". And all because more than half the tomatoes completely "plastic" and there is in them neither the taste, which adds originality, no smell, which with nothing to confuse. And even the color of some dim and dismal.

Therefore, at the end of summer (or the beginning of autumn, year on year, the peak season does not have to), I select to prepare this salad borscht about six hours. Since roomy cauldron I have only one, but I use this dressing for borscht in an incredible number of both the first and second courses. Therefore cooking it - a kind of conveyor belt several times. And you can cook it "on trial" of three pounds of tomatoes (I take a little more)

and two pounds of carrots. This is exactly the amount of five-liter Kazanka, which is much better choice for this dish. Although if it is not - it does not matter: cook neemalirovannoy pan. Just have to get in the way more often to our dressing for borscht not wor and not burnt.

In addition, you will need to hand juicer (although it may have similar and electric, but I've never met) that the skins and bones of tomatoes take away, and you only get a thick tomato juice.

Its preparation - the longest part of the process, so I try to start preparing for refueling borscht in the morning, while I was still not tired.

Carrot clean and three on a coarse grater. And though it, too, takes a certain amount of time, it's worth it. While blender is much faster, I do not use it for this dish.

And then everything is very, very simple. Two of these components are put in the casserole with the lid on the fire and stir periodically. Semi-dressing for borscht boil? Reduce to a minimum Kazankov under fire, and without removing the cover, so simmer for about 10 minutes more.

the same amount of salt,

stir and protushivaem so a couple of minutes.

In parallel with the way preparing our dressing for borscht, you need to sterilize the jars. I use a double boiler for this, but you can at all the same ten minutes to put them in a colander over a saucepan of boiling water. They decompose finished dressing for borscht and rolls hermetic lids.

That's all wisdom, dressing for borscht is ready. And though you can immediately use it for cooking all sorts of dishes, do it later, for example, with the onset of cold and dank autumn. Then only one jar of salad borscht becomes invisible bond with hot and sunny summers, whose coming will come more oh how soon.
Enjoy your appetite.