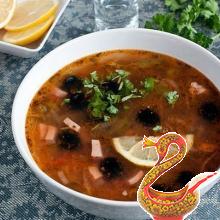 Solyanka meat - hodgepodge recipe that you can vary slightly according to your taste, for example, add a few kinds of meat - pork, beef, poultry.

1. Rinse the meat with cold water, place in a large saucepan, pour 2.5-3 liters of cold water and put on a big fire. When on the surface of the foam will begin to appear, reduce heat to boiling broth barely, and remove it until it does not cease to be produced.

2. After half an hour from the start of cooking, place the onion, carrot, celery, pepper and bay leaf. Cook for another 30-40 minutes, until the vegetables are tender, then remove and discard them. When the meat is ready (cooking time depends on the quality of meat), remove it from the broth is separated from the bones, cut into pieces of about 1.5-2 cm, and return to the broth.

3. While the soup is cooked, slice the onion into half rings and spasseruyte it in a little oil until transparent.

4. Pickles cut into small pieces. If the brine is left of them (not the marinade!), Do not mix, it can be used for halophytes later. Add the cucumber to the onions, stir and simmer on low heat for about 15 minutes.

6. What happened in the end, called the & laquo; Brez & raquo; & mdash; special dressing for halophytes. It can be prepared in advance, and if necessary stored in a refrigerator in a closed container. Now add the broth Brez.

7. Sausages and other meat cut into small cubes and drop into soup, continuing to cook on medium heat.

8. Add the broth capers (1-2 tablespoons) and olives. Try to salt, season with salt, if necessary. You can also add a bit of cucumber brine.

9. Give the finished brew-bag at least half an hour, cover the pan with a lid. Meat solyanka ready!