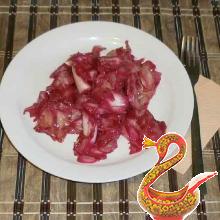 Sauerkraut I prepare for the season with an enviable regularity. With carrots, horseradish, apples, and of course with beets.

However, it does not taste that somehow tired, and some become boring. And as usual, I wanted to add variety to your menu. Therefore, I decided to cook cabbage pickled, and to diversify its noble, but quite dull color, add the beets. It is in this dish is needed only for shade, so a small tuber clean,

and rub on a grater. I'm lazy, and did so at a major. Although it is on a small, our pickled cabbage with beets, would be the most red. But as for me - and so cool.

Prepare the marinade. For this dish took dvuhkilogrammovy head of cabbage, so if you prepare from a larger or smaller volume - calculated proportions themselves. On it, we need 650 ml of water,

and the same (again four) spoon, only to have canteens, sugar.

But with the spices I did not much wiser and "reinvent the wheel", so he took a full bag of 25 grams of a mixture of acute "For carrots in Korean." Checked it has never let me down, do not lose face, and in the preparation of pickled cabbage with beets. As you know - I do it is not the first time.

All this is set on fire. As soon as it boils, turn off.

add 100 ml of table 9% vinegar, and cover with lid, give a few minutes to stand.

And in the meantime the forks of the ripe (so crunched) cabbage,

cut in half and cut into large squares.

In the five-liter pot spread (in the smaller it just does not fit) cabbage. Parse that it completely together, and fill, had time to cool slightly, marinade. Presses the yoke (I use a plate, a smaller diameter than the pan and three-liter jar with water), and six ... eight o'clock "forgets" its just on the table at room temperature.

Time has flown by. Now she sat down significantly, and in the volume halved. But do not rush her to serve and eat. More on the same six ... eight o'clock remove it in the refrigerator dogotovitsya.

Enjoy your appetite.
Finally. Store it in the refrigerator for a few days, as in the longer term, it will become very acidic by vinegar, and not as crisp. Although, given its excellent taste, this is unlikely to happen.