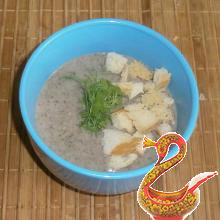 Many of us (and I - no exception), when referring to a short word "soup" brain immediately draws nourishing meat soup, thick soup, beetroot soup, in which "stands spoon" or the ear of so many different kinds of fish that do not have enough fingers on two hands bend at its listing. But I, like many of today in an attempt to diversify its menu, as well as under the influence of moralistic wife, who always insists on the "lightness and caloric intake", try to cook soup.

First experience with its vegetable version of many different ingredients was very successful, and I decided to cook soup with mushrooms. Especially that unexpectedly houses formed a few pounds this tasty, but very quickly and rapidly dying vyanuschego fungus. So that the implementation of this tasty recipe became a kind of salvation and my so clogged the freezer from another "influx of guests."

Cook so.
First of all medium-sized and brushed nicked one average head of onions. Not smaller, since everything anyway peretrёtsya, but not so large that it is all the same to put your taste.

In a large deep skillet and pour a little vegetable oil and fry the onions in it.

and cut into thin slices.

They, too, we lay in the pan to the onions and fry together already. Stand out a lot of moisture, and fungi will "float" in the water. Fry exactly as long as it is completely evaporated, so that a small fire without a lid. It took me a little over 10 minutes.

melt the (I used for this pan made of stainless steel, which then prepared a soup with mushrooms).

When the butter is completely melted, I added a couple of tablespoons of flour and continuously stir until it is completely absorbed.

and continued to interfere as long as semi-finished our soup does not boil.

Added semifinished mushrooms with onions, refilled with 500 ml of water (although you can of beef broth, will only taste better), salt (a teaspoon without top) and brought to a boil.

After that, everything blenders milled into a homogeneous mass, and again brought to a boil.

That's all the wisdom. Ladle the soup mugs or bowls and be sure to put fresh wheat crackers. Not only that, it is very beautiful (I think), so also very tasty.

As you can see, less than an hour and a minimum of food you made a little culinary masterpiece. I do not know about you, but I will soon repeat this experience, so to speak "in order to consolidate the acquired skills."