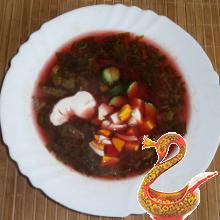 Green borsch, anyway, has absolute seasonality. And it is not only in young leaves of sorrel, which in the spring is very juicy and green as possible, but that it is green borscht vitamin flow after a cold winter. Here it is this "vitamin explosion" today and we will prepare, and in the lean version. So we are going to struggle with excess pounds and extra calories, because ahead of us and sunny summer with his very revealing clothes and tiny bathing suits.

Therefore, in order to speed up the process of cooking the green borscht, put to boil 1.5 liters of water in three-liter pot. It is and will continue to cook our soup. Can put it in two or three things leafs and eight to ten peas black pepper, and can not do it, the taste will still be very rich.

And while the water is boiling, clean the three medium beets,

and six small (or three or four large) potatoes.

The water began to boil, and put it on a coarse grater grated beets.

And to beets when cooking is not "lost" its color, and the green borscht was not only delicious, but also rich dark, put it in two or three tablespoons of tomato paste.

While the water is boiling with beets, rub on the same large grater and carrots. As you guessed, after boiling water, it will make the "Company" beet.

While prefabricated borscht boils again, cut a medium-sized potatoes and put into the same pot. Add a teaspoon of salt and two tablespoons of sugar. After everything boils, pinpoint exactly 10 minutes. That's how much it would take to our not yet green borscht cook.

In the meantime, put to boil hard boiled eggs. Take them out of the calculation of one egg for two full servings of green borscht.

Wash sorrel. Take it at the rate of one bunch per liter of soup, so in this case would take three beam.
However, we hasten to warn you. Oxalic acid released leaves after heat treatment and then during cooling green borscht, to put it mildly, is not useful. This is the soup that would not taste better the next day, but on the contrary, even worse. So if you do not plan to eat it in one day, then do the following steps with the portion that you intend to eat at one time, and the rest is simply poured into another container.

Sorrel leaves enough coarsely chopped (stems throw), lay in the soup and cook for 30 seconds. That's all green borscht cook. As well as boiled eggs that need to cool and peel off the shell. Their finely cut with a knife or yaytserezkoy.

Large cucumber (or two small) and my carefully finely cut.

In a bowl pour more steaming fresh green soup, put it in the egg, cucumber, a large spoonful of fresh cream and enjoy the incomparable taste.