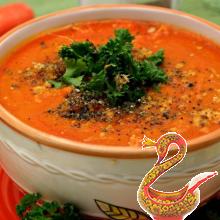 Good, clear and fragrant broth can bring to the table as a separate dish. But, more often, mistresses are using it as a base for the preparation of the first dishes or sauces to main dishes.
To the dish was not spoiled or, conversely, to improve the taste of the broth used in preparing these "highlights" ...
BROTH
- To improve the taste of carrot soup, spicy roots and onions. Which should perechistit out, wash and dry. Finely chop-namelko and fry in a little oil. And to reduce the calorie soup can fry without oil and, most importantly, more often stir the vegetables.
- Nice color and unusual fragrance will add a whole onion broth, not pilled. It is necessary only to wash and dry cloth to remove the first layer of husk and place in a saucepan. How to soften - remove.
- You can add a lot of spicy broth being prepared, diverse roots. And when they are tender, remove them, broth, and then cook further by adding other components.
- To already cooked broth became transparent, add the necessary ordinary eggshells. Then strain the broth is necessary.
BORSCH
- For the cabbage borscht is necessary to take only fresh, preferably, white variety. It should be finely chop finely, and add at the end of cooking.
- If a recipe is provided prunes, that it is necessary to add at the end of the cooking dish.
- Borscht prepared with mushrooms and mushroom broth? Mushrooms should be cut platelets, finely and fry with onions, carrots and rootlets. Add to soup himself with roasting.
- Tomato paste, tomato juice, tomato ketchup or sweet to a soup is not added, it should be done in fifteen minutes before the end of cooking.
- Borscht prepared, it is not necessary to immediately pour on plates. Dish should be given time, present, nalitsya juices. Time: twenty-five minutes.
SOUP
- Any soup cooking on the fire must only minimal power.
- If the soup is cooked without potatoes, without any grains, then it should fill flour gravy. In this case, the soup is thick, so, satisfying.
- In a soup made with potatoes, add cereal, or pasta. You can cook with beans.
- To taste and flavor to the soup added roots, carrots, onions, assorted various dry spices.
- If the soup is cooked on mushroom broth, then put it in the rump. It's worth noting that, beans, lentils, lots of vegetables to the mushroom broth are not suitable.
- Rice soup will turn transparent if the rump rinse with cool water, and then, fifteen minutes to put in boiling salty water. Boil, discard in a colander, decant the liquid, and, only then, to shift in preparing soup.
SOLYANKA
- If you add tongue, then it must be properly prepared, and then the dish will not be ruined. Rinse in cool water with a brush. Carefully! Cover with cold water. Boil, boil after two and a half hours. Approximately thirty minutes before end of cooking, sprinkle with salt, add the parsley. Language is ready, drain, pour cold. Clear from films and skin. Transfer to a separate pot, cover. At night, put in the refrigerator.
- In the event that solyanka cooked with heart. That is, it must be cut lengthwise. Transfer to a separate pot, cover, place in refrigerator. Time: a couple of hours, may be more. Then, thoroughly rinsed in cold water. Transfer to a saucepan, add water. Cook on medium until soft coal fire.
Категория совета:
Супы
Категория:
Рецепты супов
Похожие советы:
Бульон, Борщ, Суп, Солянка.
Несколько правил приготовления первых блюд
Chicken soup with cheese rolls
Куриный суп с клецками с сыром
Tomato soup recipe with photos