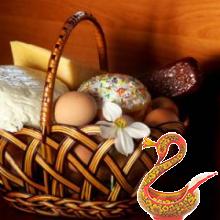 Orthodox Easter - the holiday came from the ancient times

The most important holiday for Christians is Easteк but there are some difference between Catholic and Orthodox Easter. All known ancient holiday of Easter, but there are many versions of its origin. Say the Russian Orthodox Church says that on this day the crucified Jesus Christ miraculously rose again, and in his honor held traditional celebrations.

Another opinion about the origin of Easter observed by historians. They believe that this holiday originated in ancient times as part of drevneiudeyskomu cult of the God Yahweh. It was a traditional spring rituals associated with sacrifices to the gods, responsible for farming and harvesting. From there comes the idea of the gods who can resurrect after worldly death. Symbolically it is connected with the process of seasonal decay and rebirth of nature. Spring is the time of new life, and to life again arose, it was necessary to please the leader of the world to the gods.

In Christianity also originally celebrated the day of death, not the resurrection of Christ, and Easter was made not to have fun, but to grieve about the lost of God the son. Orthodox Easter was then the part of the fast, and did not assume any of the feasts. Later the meaning of the holiday has changed, and beginning with the year 325 it was determined the procedure for establishing the date for celebrating Christ's resurrection. As in ancient pagan times, this day was established in connection with the dates of the vernal equinox and the phases of the moon. Because of this the date of Easter – the value of floating, varying between late March and late April in the old style.

The first appearance of Russian Orthodox Easter and traditional festivals usually associated with the moment of christening of Russia. Easter was organically synthesized with pagan spring celebrations in honor of the future harvest, which was celebrated by the Slavs much earlier. By the way, the tradition to paint eggs in different colors is also a heritage of ancient centuries. In those days it was common to treat eggs as something magical and sacred, so their pagan gods of the Slavs tried to cajole eggs, painted with the blood of various animals. Later, there were less bloodthirsty ways of coloring eggs.

This is a very important part of the preparation for Russian Orthodox Easter is fast. During this period in the churches conducted services, read religious books and sermons are about humility and repentance of sin. Stories about the victim for the sins of man Christ and the final judgment are designed to make people religious fear, which in the future will help to avoid committing sinful acts. The duration of the fast is great – about a seven-week Christians observe a special diet, refraining from amusements, and lead a humble lifestyle, paying tribute to the son of God, who gave his life for the people. It helps to appreciate the importance of such events as the Passover, and to take this holiday not just as an occasion for gluttony and libations, but as an important step that completes the cleansing occurring to a person during Lent. On the night of the Passover it was not customary to go to bed, as it was believed that on this special feast God gives all happiness.

Orthodox Easter is the realization of believers that eternal life is renewed and revived, and every believer eternal life. It is believed that by Easter you need to calm your mind and body, to prepare for it during Great lent. On the eve of Easter, the day of Holy Thursday, try to clean the house, wash the Windows, repair broken things, to throw away everything unnecessary, to clean up the garbage around the house that had accumulated after winter. On Thursday sheared the beard, mustache, hair.

Before the holiday all the family definitely went to the bath, and in the resurrection of Christ put on new clothes. The souls of men were filled with pure thoughts and good deeds are forgotten all the grief and resentment farewell.

Night takes place in the temple is a special, solemn divine service. With baskets full of Easter food, they tremblingly await the ritual consecration of food.
After the service the parishioners three times kiss each other, congratulating each other with words "Christ is risen!" and exchanging eggs, traditionally painted in red color.
When he returned home, he could not cross the threshold of the house, without the cherished words: "the Easter day in the house, all the evil spirits from the house". Then all gather for a family meal, where the taste different cooked by the lady of the house, dishes.

A special place on the table is a painted eggs and festive Easter cake and Easter. It was believed that on a festive table it is necessary to put not less than 48 dishes. And first tasted the consecrated food brought to the service, first of all colored eggs. Wealthy families tried to prepare so much food enough to feed to satiety all households, including servants. Were treated to festive dishes for all: guests, friends and acquaintances. Gave treats to shelters and monasteries.
Ortodox Easter in 2016 – May 1. Hurry up and get ready!