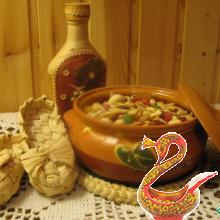 The formation Authentic russian recipes of Russian cuisine has a long path, during which there were a lot of stages left a certain trace. At the beginning of the development of Russian national cuisine appeared uncrowned king of table - a yeast bread made from rye flour. Is it possible to imagine a meal without bread? Then there are other flour products, bagels, rolls, pies, pancakes, sochniki. Preparing everything from yeast (sour) test.

Much space was given to the cereals, a variety of introduced vegetables, mushrooms, berries, milk, and rarely meat. Gradually, the menu table was added drinks - kvass, Sbiten (honey drink), honey wine. The vegetables were prepared and was eaten separately. The salads appeared on the menu table in the nineteenth century. A special place was given for such dishes as zatirukha, stew, soup. All called by the General name - "hlyobovo" - whih means slurp or "the them bowls of brown"

Meat and dairy products were consumed very rarely. By the end of the seventeenth century the commoner menu has been simplified, while the table the boyars (reach people), and the nobility became more refined. Includes many foreign dishes, complicated old Russian dishes. Non-table dinners rich in meat, fowl and poultry. It is divided meat for corned beef or ham, the fresh flesh and suckling pig. For frying or sauntering. Meatless buffet was also rich in vegetable - fish-and-vegetable variety. For a change of taste in food was added horseradish, onion, garlic, anise, dill, parsley and black pepper, cloves, ginger, cardamom and other spices, which appeared in the sixteenth century.
Many dishes of traditional Russian cuisine in our time, not only not consumed, but they are not well known, but many people do not know what it means - tyurya, vole, Solodukha, povaliha, coliva, Gamula. But the whole world knows, what is caviar, salmon, aspic. Hardly anyone is preparing now Guriev porridge, but many people like KULEBYAKA. Lets talk about these Authentic russian recipes.

Guryevskaya porridge is considered one of the most interesting, healthy and tasty cereals. She is called the "Royal mess" in honor of the Emperor Alexander III is very fond of this mess. But its name "Guryev" was due to the chef to Zakhar Kuzmin, who worked at the Minister Guriev. He made up this recipe. Guriev porridge can be safely ranked as the second dish, and dessert. Semolina, skim milk, nuts, properly prepared, dried fruits, stewing porridge. All this makes the porridge cooking is not simple. And you can verify this by preparing Guriev porridge.

HOW TO COOK PORRIDGE:
Nuts:
Walnuts pour boiling water, this will help remove the film. Dry to RUB them by adding a spoon of warm water. Foam: put the Cream in a cast iron pot in the oven, and to remove the formed ruddy, dense foam. Semolina porridge: with milk or cream to the remaining cooking thick porridge, pouring crushed nuts, spices, sugar. Add the oil and mix. In ovenproof dish pour a portion of semolina in a layer of one centimetre, to cover the foam, again to pour the cereal, lay on top of the foam. Before the last layer, add the jam, close porridge with water and place in preheated oven for 15 minutes. Fire reduce. Take out the cereal, pour the greater part of the remaining jam and serve. The recipe you can add and change them to your taste.

As mentioned above, farinaceous products have been revered in Russia. And the pie was the best snack under Russian cabbage soup. What is a pie? Pot pie oval and convex in shape. The word "pie" comes from the word "kolob" - ball loaf. But from the bread with lots of toppings. Ate a pie, from peasants to kings. From different types of dough prepare this cake with all sorts of fillings, and sometimes in a pie put all the toppings at once is layered. Pie is not easy to cook. Consider the recipe for "Moscow kulebyaka". To prepare the pie, you need to be.

HOW TO COOK KULEBYAKA:
Dough:
Sifted twice the flour and salt to mix. Separately dissolve the yeast, add the sugar. Set aside to rise. When the dough will fall off, pour it into the flour with the salt and knead the dough. Add the butter and mix thoroughly. Cover and leave for 40 minutes, re-knead and leave to rise. Toppings: 1. The yolk separated from the protein and whole egg and beat with milk. Pour into flour and mix. From this test, to fry pancakes, cool. 2. Chop the onions and fry until Golden in butter. Cut mushrooms thinly and saute in butter. Boil the rice. Minced meat combine with part of the bow. Separately rice, onions and mushrooms mix. Yeast dough divide - one more, another less. A smaller portion is cut in thickness of five millimeters. Put on a baking tray, sprinkle with oil. On top put the mushroom stuffing, and mushrooms to put on top of pancakes, on top of the stuffing. Roll large portion of dough and cover the pie. To clip the edges. To grease with a yolk and bake ten minutes.

This delicious pie can be submitted and a separate dish and instead of bread as a snack.