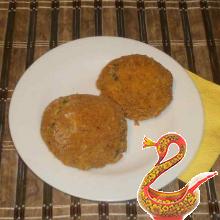 Imagine the situation completely, who was with me in reality. The hostel, a strange city and painfully long preparation for the state exam. Time to complete cooking "three-course" not at all, but the sausage with pasta is simply no longer enough. And I have prepared this "something" is quite simple, satisfying and very tasty.

And all of two main components, meat (just take the stuffing, so save a lot of time)

and potatoes. Both components need roughly equal amounts, such as a pound for pound.

Ah yes, years later, I learned that my unidentified "culinary masterpiece" is absolutely clear title: potato croquettes with meat. Well, so, so wrong. So today we have a menu with meat croquettes.
In addition, we need three chicken eggs (if small, then go ahead and take four)

a large package of bread crumbs,

Peeling potatoes, fill with water and set on fire. Cook as usual mashed potatoes until cooked. So, add sugar (but not in any way do not salt, or longer will be prepared), and 20 minutes after boiling, over low heat, and under the hood.
While potatoes are cooked, five ... seven minutes in vegetable oil fry the mince. As soon as you put in the pan, stir it, not to get one big shapeless cutlet.

and in the same pan add one teaspoon of salt, a third - ground black pepper, two eggs, a semi minced meat and again well-shuffled. Give a little cool, so a five-seven minutes ... forget semi-finished meat croquettes easy on the table.

At 170 degrees set to heat up the oven. Our three "boning" component harvests and begin to "create".
First ball, rolled up wet hands, collapses in agony,

then - in the egg (take a broad capacity, it will be much easier)

and now in breadcrumbs.

Baking is better to lay a baking paper, and it is almost ready to spread our croquettes with meat. And so - one by one, until all the stuffing is finished. This - the weight on one standard baking, so if you have more - get ready that at one time all the croquettes with meat simply do not vlezut. They should not fit tightly against one another, otherwise crisp, dense crust you simply will not work.

Baking of 15 ... 20 minutes, the uppermost shelf. When croquettes with meat ready - right; Ideas and eat them, because they cool down very quickly.