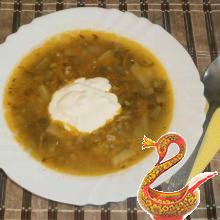 Many who read the name of the dishes - classic pickle, do not even open it, and even more so will not read the whole article. Meanwhile, a classic preparation is very tasty and very hearty dishes that have more than one hundred years. So today we have the menu - the most ordinary pickle.

The first step is put to cook soup. 300 grams (or so) of meat "on the bone", preferably beef, one onion and one carrot pour a half liters of water and set on fire. When the boil and five ... seven minutes cook, remove the foam and unappetizing but now throws two ... three bay leaves and five ... seven peas black pepper.

Reduce the heat to low and cook, covered it in about half an hour.
While the broth is prepared, Let 's take the other components of our ordinary rassolnik. One medium onion bulb

Carrot rub on a coarse grater,

and cut the potatoes already larger in small cubes.

When the broth is cooked, and then filter it with 100 grams of pearl barley, put it to cook potatoes. All these manipulations - for two liters of ordinary rassolnik, so pick up the proper utensils.

In the meantime, potatoes cooked with barley, zazharku prepare for our ordinary rassolnik. Put a pan on the thirty grams of butter and cook it. When the butter is melted, spread the onion and fry for several minutes until the color will not yellow.

Now lay him carrots, and stir and fry so three ... four minutes.

Meat from the broth has cooled down are welded, so you can not afraid to get burned. Cut it and also spread in the pan. Stirred again and after a few minutes,

lay it all in a pot.

Two pickles (this is very important, no pickles, vinegar ruin the taste of not only our ordinary rassolnik, but also any other)

and also send in a saucepan. All boil for a few minutes? Only now are trying to salt our ordinary pickle, if you want to add salt, and cook another minute, turn it off. Let stand up five more ... seven minutes, especially as he still is still very hot.

Now spill it on the plates, add a large spoonful of sour cream and; Ideas on the table.

That's all wisdom, our most common, but extremely tasty pickle is ready. Enjoy your appetite.