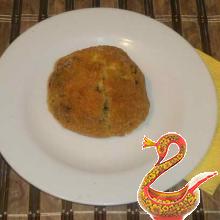 The first time I cooked these croquettes with mushrooms, the reason was very simple and prosaic. On the same day, only the early-early morning (or late at night, I do not remember), to put it mildly drunk, I returned home with a corporate party. And even talked to others and proved his point of view on a very important issue, but simply put, drilling something completely unintelligible. And since the run to the store for flowers, champagne and chocolates as an apology (an hour with little wife had to return home) had neither the strength nor the desire, I decided to "curry favor" in this way. Especially because the contents of the fridge the day was very poor, and again, go to the store oh how not like. And you know, it was not just nice (s), but also very tasty (I).
Therefore, very soon, I decided to repeat the experience, and make these croquettes are already not in a hurry, all photographed and write the most comprehensive, detailed recipe "for Dummies".
For him, we need 250 ... 300 grams of potatoes,

and the same amount of fresh mushrooms, such as mushrooms. Although the first time I took frozen and the difference in taste and, in preparation technology, it is not felt.

In addition it will need breadcrumbs,

half a cup of flour,

and two eggs. One goes to the very foundation, and in the other we dip our croquettes with mushrooms.

Also need water, one teaspoon of salt and two - sugar and a tablespoon of vegetable oil. That's all finished cooking.
Peeling potatoes, cut not thick plates (quickly cooked), fill with water, add sugar in it and put it on the stove. When the water boils, reduce the heat and timed 20 minutes.

Mushrooms cut into the thinnest slices, pour in the oil pan,

and we place them fried. Among them stand out a lot of moisture, so uncovered and reduce heat, cook their seven ... ten minutes. Stirring occasionally to avoid burnt.

Potatoes cooked. Drain all the water, add salt and shifting.

Five ... seven minutes when it has cooled slightly, add the egg, mushrooms and all thoroughly mixed.

160 ... 170 degrees set to heat up the oven. Oh yeah, I forgot to say that what I have seen recipes for dishes such had read the same thing: "fry in deep fat, then fold ready croquettes on a napkin, and allow to drain excess fat." And since the court was the middle of April, when the ladies carefully watching their figure and overweight, weighing five times a day, this option is cooking for me did not fit. So I decided to just bake them.
Cover the baking baking paper (do not stick, and much easier to wash), and cook biscuits, flour and egg.
Wet hands roll the ball, roll in flour,

then dip in the egg,

and roll again, but now in the breadcrumbs.

Spread on a baking sheet and also make others croquettes with mushrooms.

Bake them for about 20 minutes (still all components are ready), on the top shelf. As I learned later, the name comes from the word croquettes "crunch", so that the crust in them the most important thing.
We serve and eat immediately, as these croquettes with mushrooms very quickly cooled.

That's all the wisdom. And note that you have read this article only slightly less time than just cook these wonderful croquettes with mushrooms.
Enjoy your appetite.