Sauces recipes / A delicious homemade ketchup for the winter

A delicious homemade ketchup for the winter 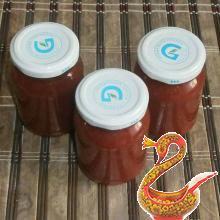 A truly delicious ketchup loves prevailing most of us. But here more often, especially in supermarkets, you can hear from the parents counsel their children about the attractive packaging of one or another producer, like "put it immediately in place," or "not, in any case we will not buy it." And indeed, if you read the composition, which is often written in small and very small print, purchase and eat it to very few people want.

A really delicious ketchup preparing all of the three main components:
• tomatoes,

• and two support in the form of sugar

That's all, no "flavor identical to natural", "thickening", and even more so - "flavor enhancers". All of this simply does not, and get a taste still unmatched.
Preparing our delicious ketchup is very simple, only two but: you need a large cauldron, a capacity of approximately five liters and a special juicer separates the juice from the skins and seeds.

Therefore, about four pounds of tomatoes just cut in half and placed in a cauldron.

pepper and take out the white core with the seeds and cut them into several parts.

Put the cauldron with our "wealth" on fire. Do not add water (tomatoes allocate plenty of moisture), and when it comes to a boil, reduce to a minimum the heat and simmer, covered about three hours.

Time passed quickly (in fact, nothing to do with Kazankov where our future is preparing a delicious ketchup simply unnecessary). Turn off the fire, open the lid and give him half an hour to cool down.

After the contents of the juicer skipping and at the same casserole evaporated. And do not try to pour stand out in a large number of liquid juice with vegetables. Though prepare our delicious ketchup with it you'll be much longer (and all it will take about three hours after re-boiling), the taste of it will be much richer and more interesting. Evaporated without a lid, on the smallest fire after boiling, and be sure to stir, especially from the bottom to our delicious ketchup does not stick and not burnt.

and laid in sterilized jars. I do it intentionally in small, because our delicious ketchup absolutely natural, and therefore open even in the refrigerator, it may eventually turn sour.

That's all wisdom, enjoy your appetite.