How to cook bean soup 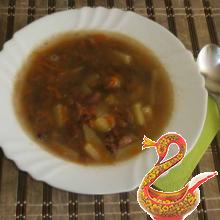 Preparation of bean soup is not one of those dishes, "when there is very desirable, and time to prepare - just barely enough." But it is not because it is very difficult, very time-consuming, or need to be quite exotic products. No. On the contrary, everything is very simple, and just below you will see for yourself.

Just beans, which directly for bean soup will need about 300 grams, it is necessary to soak in advance. I usually do it the night before, so it will have to plan the day before cooking. However, this is nothing complicated, just beans (white, dark or a mixture thereof)

to pour one liter of plain water and "forget" to swell at room temperature. And do not forget to put a teaspoon of sugar, so the beans will be noticeably softer, and cook for half an hour faster.

The next day in the same pan put her stew. One and a half hours after boiling, in a small fire and cover with lid. And since then in the same pan and we will prepare our bean soup, then take it immediately greater volume of two and a half ... three liter.

Now broth. As usual: 300 ... 350 grams of meat (preferably on the bone), one carrot, one ... two onion bulbs directly in the husk, heaped teaspoons of salt, two ... three bay leaves, five ... seven balls of black pepper and one quart of water. Boiled, removed the foam, reduce heat, and without removing the cover, cook all the same half hour.

While beans and broth stew, one large carrot clean,

and rub on a coarse grater.

And further still easier: almost ready beans in a pan, where it is boiled, put raw vegetables, strain the broth into it and cook it all together for another 15 minutes. If necessary, add water, as it could simply soak or boil.