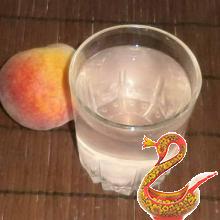 Peaches for me has always been the epitome of not just "one more fruit, delicious, but one of ..." and synonymous with tenderness, but the saturation. And of course, the original flavor, which is entirely transferred to the peach compote, which we today and prepare.

Preparing it is simple enough, and to further reduce the cooking time of peach compote, put to boil ordinary water at the rate of two and a half liters per three-liter jar.

My peaches. From personal experience, I will say that it is better to take small and dense enough. So you're guaranteed zapihnёte them in a jar, and peaches with pouring boiling water over them and not crash raspolzutsya, and the peach compote remain transparent and not cloudy.

Take them out of the calculation of 500 grams per jar (although it is unlikely you are limited to one butylki), and stacked.

Time has flown by. Merge peach compote back into the pan and put it back on to boil. And in the meantime the sugar,

the rate of 150 grams per liter of three peach compote future, sleeps in a jar.

Again pour the boiled peach compote fruit roll up lids and leave to cool on the same six ... eight o'clock upside down. So you check the quality and covers for rolling and how well you close them.

And when in the winter, or at least the late autumn (peach compote should stand for at least several months to his tastes have become one), you open the jar, you will be surprised. Very hard pleasantly surprised.