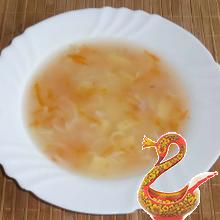 Recipes, which prepares the noodle soup is very, very simple, you can even say primitive, but at the same time very, very tasty. It will repeat almost every rookie, but he has successfully become a subject of pride for even experienced cooks. Therefore theoretical experience to become practical, just cook it.

First of all put the stew broth. To do this, take one large (or two small) chicken breasts, if your goal - soup diet, or some chicken wings, if the total fat content of not much scares you.

For cooking, take one and a half liters of water, the meat itself, five to seven peas black pepper, two bay leaves and a teaspoon of salt without top. Boil it after boiling over low heat, naturally under the lid, ten hour ... hour. For the chicken broth that will be enough.

and cut it into small cubes. Put the broth and continue cooking over low heat.

and rub on a coarse grater. As you have already guessed, and send it to boil potatoes.

After eight to ten minutes 150 grams of thin noodles send stew in our semi-finished soup and cook so still four to five minutes.

That's all the wisdom, immediately pour it on a plate and enjoy the taste of fresh, hot noodle soup with chicken.
The only advice - do not leave it for tomorrow, so raspolzёtsya noodles and you get unappetizing murky "brew", and not tasty chicken soup. Though not with the home, but still noodles.