Delicious canned tomatoes for the winter 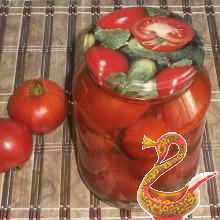 Canned marinated tomatoes cook almost everyone who makes at least some seaming for the winter. Still, a jar of pickled tomatoes, open to ordinary dinner, instantly transforms it and makes it not only delicious, but beautiful and even a little festive. And I'm not being "black sheep" in home cooking, too close them.

But one day I wanted to cook canned tomatoes without adding a drop of vinegar.
And even though I'm worried that they will not stand for and just explode, practice has shown that my fears at all in vain. As it turned out, his own acid in tomatoes is sufficient that it was a good preservative, and they stood all winter. Although given their original flavor and tenderness, cover not one, not two banks. Very quickly you rasprobuete them.
And now everything in order.

To prepare pasteurized tomato, it took me a little more than a kilogram of tomatoes (based on two-liter jar)

and water, a little less than a liter. She immediately need to put on the fire to boil.

In the meantime, lay on the bottom of the banks brushed garlic, pepper, sliced into thin rings onion, salt and tamp to the top of the bank tomatoes. But in any case, do not force them. May burst, and then the appearance of the finished pasteurized tomato cans will be permanently damaged.

Fill in the meantime had time to boil water and put into a suitable saucepan pasteurized.

When the water boils, Race against the clock to 40 minutes (I was reinsured, and pasteurized for ten minutes longer) and then immediately close the airtight lid.

That's all the wisdom. The only thing that now scalded tomatoes should stand two ... three months to their taste became inseparable.
Enjoy your meal.