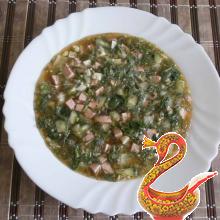 Summer heat, scorching heat and tries everything not just heat up and incinerate the roast and the sun. Very hard and unbearably difficult. Especially if there is no air conditioning in the room. But how it all will miss the winter, and before the arrival of summer, we will consider the weeks and days, anxiously expecting the full June come back in May.
And even though most of the dishes are not bound to the season, perhaps it is - an exception.

And such a simple hash - the present summer pudding, because I cook it on the cold kvass.

• a bunch of dill or parsley

• and five ... six large (I voted small, so took more) tubers of potatoes.

Potatoes and eggs put the stew. I like to do it in a double boiler, and not the fault of prigorit forgetfulness, and digest it just will not work. And cucumbers and greens and give my completely drain the moisture, otherwise our simple hash simply "will float" when cutting.
Sausage cut into small cubes,

Meanwhile, boil eggs. They need to cool, peel off the shell and cut into cubes. Take yaytserezku, so it will be much faster.

Cook and even had time to cool a little potato. She peeled the same yaytserezkoy that just crushed eggs, cut into small cubes root.

Add a teaspoon of salt with a slide and mix all ingredients together. It turns out a kind of unmade salad that many of my friends names is not only as "old Olivier."

Now decompose it on plates and pour kvas. Who loves - you can add spicy mustard, sour cream or mayonnaise, but I prefer there is a simple hodgepodge just. Although from supplements rarely refuse.

That's all, enjoy your meal.