How to cook eggplant caviar 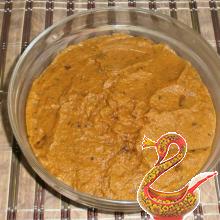 Most of us, especially those who are already out of childhood and adolescence, remember the phrase from the wonderful film "Ivan Vasilyevich Changes Occupation": "... overseas caviar, eggplant." And no wonder she was on holiday table with red and black caviar, because eggplant caviar is really very, very tasty.

And how to cook it simply, you do now to make sure.
To prepare the eggplant caviar, we need:
• 700 grams (or so) fresh eggplant,

• a pair of medium-sized heads of onions,

It is necessary to clean and cut into large cubes. All the same, then all this would be after frying in a blender and grind.
The pan, to which there is cover (this is mandatory), pour 50 ml of vegetable oil and put it on the fire to warm up. When oil zashkvorchit (not before), spread the onion. So it does not soften, but rather acquire a ruddy color and the fragrance, for which we and add it to the eggplant caviar.

Three minutes later, there also lay the carrots and stir. Fry two vegetables together for five ... seven (depending on the juiciness of carrots) minutes, uncovered and not diminishing fire.

Add the eggplant. They immediately absorb oil, so long as another five minutes you'll cook it all together, two ... three times the mix. Otherwise future Eggplant simply pristynet and foothills.

Now squeeze the garlic press and add one teaspoon of salt with a slide and sugar.

Mix well and cook a few more minutes.
Now tomatoes cut in half and rub them in the pan so that the dense skin was left in your hands, and in the pan got only a gentle tomato puree. Mix again, and already covered with a lid and turn down the fire under the pan, simmer for another five minutes ... seven.

Remove from the heat get a "semi-finished" our future eggplant caviar and give him 10 ... 15 minutes to stand and cool.

Now everything is milled "into dust" blender (immersion or with a bowl), and in the same pan, under the lid, over medium heat protushivaem another four ... five minutes.

That's all the wisdom. Eggplant, which is equally tasty and hot and cold, is now ready.
Enjoy your meal.