How to cook sorrel soup puree 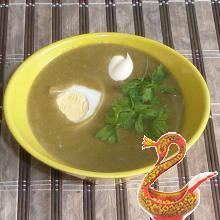 I do not know about you, but I have a sorrel entree is strongly associated with the green borscht, which I am preparing for the season frequently. However, for other meals sorrel as the main ingredient, or as a seasoning, I have not used ever. Up to this point.

And therefore I was very interested to try it, and I think the dish turned out quite well. At least, this sorrel soup (namely it today and we will prepare), I will do again and again.
First of all, take 300 ml of broth. Although, if you do without it, on the water, as I see it, it will not lose much. But the fact that the number of calories in each serving, which is considered very kind lady, will be significantly less. This just can not doubt.

cut into small cubes (so they quickly boiled), and therefore in this broth cook until tender. Depending on the variety, it will be 10 ... 12 minutes after re-boiling, or thereabouts.

On a deep frying pan, to which there is the cover (she later we still useful), place 50 grams of butter and put it on the fire.

Sorrel wash and shake off the excess moisture from.

Coarsely chop it (still later he was crushed in a blender)

and place on the pan. A little advice: if you do not know this sort of sorrel and cook from it for the first time, it is best to throw out the stems. And though they are - the most succulent, "hairs" in the finished dish can irritate you.
For three ... four minutes (make a small fire under the pan) Stir once or twice. The leaves have changed their color from bright green to a marsh.

Then, three tablespoons of flour,

Put in sorrel and mix.

After another three minutes, pour the broth in which the cooked potatoes and stir again, under the cover (here it is useful to us), simmer for exactly five minutes.

We completely forgot about the eggs. They need to cook hard-boiled, therefore, 12 minutes in boiling water with a teaspoon of salt (to even cracked the egg does not leak) and then cool under running water.

blender grind everything "into dust"

bring to a boil our original sorrel soup.

And one more little detail: do not put salt in it. Not at all. Will feel the difference.

So no tricks and complexities in this recipe simply does not. After just 20 minutes, we have prepared a very original sorrel soup. The only thing that it just cries, it's a big spoonful of thick cream. Its actually I should. And you urge.
Bon appetit.