How to cook liver cake 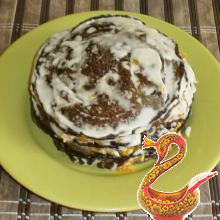 I do not know about you, but I have the word "cake" is absolutely certain, clear association:
• This is an incredibly delicious:
• It is very sweet (and very rich in calories);
• The most anticipated dessert for any occasion;
• Buy (or preparation) only on auspicious occasion;
• Ideally - to be with lit candles Name day and served in complete darkness.

However, the hepatic cake satisfies only one association, whereas in all other aspects it fundamentally they do not correspond. And the first of them - a cold dish, which also still and simply cook. So today, I'll do it, and you're all over can see for yourself.
First of all take a pound gras. In principle, any (pork, chicken or any other), but I prefer the simplest, beef. And if the time before the submission you are not limited arrival of hungry kids or fussy guests, then an hour and a half ... put it in a container with a couple of liters of cold water. Believe me, when you pull out of her gras, you are very much surprised at what he saw.

And while gras soaked, two large (or three smaller ones) put a carrot stew.

and together with them gras resin blender.

Now they add one egg,

four tablespoons of flour, a teaspoon of salt with a slide and all together again mix well.

Cook, and even had time to cool down a bit, carrots. Peel and grate it on a coarse grater,

squeeze in her press three cloves of garlic,

and adding about 50 grams of mayonnaise,

Now fry themselves "cakes." Recruit ladle (this will be the yardstick that they were all the same size) is enough batter and pour into a heated frying pan with vegetable oil. Just do not get carried away with them, otherwise a very gentle liver dough simply dry while cooking.

After two or three minutes ... (pans are different) flip a pancake. To do this, be sure to use a wide spatula, since they are obtained are quite thin and very tender.

Now spread it on a plate and fry the next cake hepatic our cake.

In the meantime, a tablespoon of the filling with a slide (another universal measurement for this dish in particular, and in general, in the kitchen) spread an even layer of stuffing and smeared it. Again pancake cooked gras, and again a layer of stuffing. And so - until the very end.

The last layer of grease tablespoon of mayonnaise and give the finished cake hepatic fifteen minutes to cool down. So it will not only be an acceptable temperature, so more and have time to soak in, and become a single entity, to be much tastier.
Now, cut into serving pieces (like a sweet cake), and lay delicious hepatic cake on plates.

That's all, enjoy your meal.