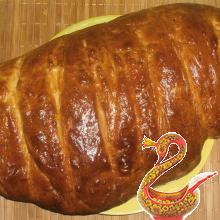 I do not know about you, but I was faced with the fact that not enough varieties of bread. No, even in the seedy gastronomchike near the house they are always five ... six varieties, and in specialized grain pavilions and tents account is already underway for dozens. But even with such an abundance of baked goods, I could not find what he wanted: a delicious, festive, but not Cakebread. And then the motto of all car tuners: can not buy - Build myself, I decided to use in your kitchen.

Good mother, seeing my zeal no joke, decided to help and learned such an ancient recipe that's the first time I have not been able to. And even the components of this festive bread are not in grams and milliliters, and common-ounce faceted glasses and spoons. So what if someone it is inconvenient - your own, and I follow the written, just prepare this festive bread.
The first step in a large bowl, place a comfortable four and a half cups of flour (you had to sift through a fine sieve, but I did not). But why in a large and comfortable? So there we are going to knead the dough.

Add a half cup of water,

third cup of milk powder and mix everything well. Why not just take the whole milk the same amount - I do not know. I did everything for the first time, so do not make any changes to the classic recipe.

and yeast. Here I departed from the classic recipe. Since the middle of the last century were not yet known active dry yeast, and use ordinary housewives. Standard bag of 11 grams was even a bit too much, but I already knew already then. In the meantime, put it completely.

A yeast to come faster, put five tablespoons of sugar. Just to be sure I put even six.

and again everything is very good and very carefully knead. Dough for our holiday bread is ready. Cover with a towel and a half hour ... hour set aside approach.

The dough is very well risen and increased in size three times.

Punched him on all sides, it will rise again.

Baking blanketed with baking paper and spread the dough on it. Any form, it does not matter, I chose an elongated, "a la bast." Relinquish it to the side for another fifteen ... twenty minutes.

One egg (did not work make bread without this animal products) is broken, and gently whisking into a homogeneous mass.

At 190 degrees put heat up the oven.
Who managed to rise during this time of festive cake mix bread chaotic and shallow incised on top and good grease egg. The taste is not affected, but the look - very much.

Put baked bread on our holiday the middle shelf of the oven. And so cook about 40 minutes until the festive bread will not become light brown. But believe me, the smell is such that to look through the window of the oven (do not open, otherwise the bread shall fade and be unsympathetic "sole") will very often. And you do not overdo it and do not burn.

That's all the wisdom. As you can see - there is nothing complicated here, as they say, "the eyes are afraid, and make up."
Bon appetit.