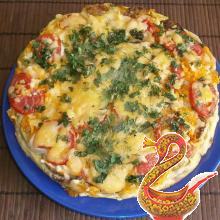 The classical case, that is for sure is familiar to many of us: the spouse to "chronic dieting," and all the flour is itself prohibited, and home-baked from wheat flour "big and bold taboo." Children on the contrary, grow, require something tasty and varied, and the pizza they have - one of the most favorite dishes, with breakfast, lunch and dinner. Therefore, my goal - to combine the seemingly incompatible: the restrictions of his wife and two sons tastes, which, as I think I have done very adequately.

So, today we have the menu squash pizza with chicken. To do this, I need two large zucchini, weighing about a pound.

a couple of eggs,

half the beam of green,

and 100 ml of milk. Will also need oil for frying and salt. Although the actual basic prerequisites of all three: zucchini, cheese and tomatoes, while everything else - a matter of taste and availability of these products in the refrigerator.

Getting cooking. Breast, you need to cook until soft, but how to do it - decide for yourself. Can five minutes dropped into boiling water, and can be wrapped in foil and bake seven ... ten minutes in the oven at 180 ... 200 degrees. By the way if you choose this route - do not turn off the oven, since at the same temperature and then we'll bake our squash pizza.
But we were a little distracted. Egg whisk until smooth.

Zucchini cut into thick slices, and on the plate, meanwhile, put the pan and pour it on a little vegetable oil.

Each circle zucchini dip in the egg,

put in flour each side

and fry on each side until golden brown, so that the fire at all times under the frying pan is not reduced.