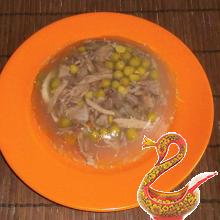 Beef gelatin, as well as any other, love is not only me, but my wife and kids with her. And parents, "infantrymen entered to us at the light," also would not mind to try it. But here's the thing: when I cook it, and then me "cards in your hand."

So today I will try and teach you, with the recipe itself is not just to bring in the form of three "P" (clean, cook, post), and the most detail, with all the subtleties. And how well I got it - to judge you.
Self cooking beef jelly simple but lengthy process. So I start it right after lunch, so he stood carefully, standing for the whole night. And though modern gelatin fully grasped two ... three hours, I'm doing this just to be sure, "the old fashioned way."
So, prepare beef jelly. Kilogram of beef ... and a half, preferably with bone, pour a liter of water and put on fire. Five minutes after the water comes to a boil, then merge it, and fill it with the meat already four liters of water,

Besides purify and we place two ... three major Morkovin

and the same head of onion. And they can only be washed, cleaned and even, if you want to beef jelly darker color.

We put it all on fire, and when the broth boils, reduce it to a minimum. So beef jelly will boil 4.5 ... 5 hours. And be sure the lid, otherwise the whole broth just boil.
When the process of cooking beef jelly comes to a close, hard-boiled chicken eggs cook three. Nothing new, 12 minutes after boiling, then cool under running water. And to even cracked the egg is not leaked out during cooking, put a teaspoon of salt water.

Now is filtered through a fine sieve broth, meat and carrots are allowed to cool, and the rest are throwing. Taste and smell their they have already given us more and simply do not need.
In the broth add three teaspoons heaped tablespoons of salt,

and bring to a boil. But in any case, do not boil, as the gelatin will lose its basic property, for which we have and add it.
In addition to this, we need the bank (330 grams) canned green peas from which to drain the brine.

The cooled meat disassemble the fiber, and the wires and dice throw. So our beef jelly is not only tasty, but also gentle.

Harvested form. They can be any size, depending on their availability and your desire, but not necessarily deep, as the main component of beef jelly, it is of course the broth.
Now make a "puzzle." Some meat,

and it all pour broth. And so in all forms. The first time, when you do not know how many forms of beef jelly you get, better to first decompose the "solid" in all forms, and then pour them and the broth. So it will be evenly distributed the meat and broth Nedolya you are not afraid

Put in the refrigerator to harden, and six ... eight o'clock we've got a real beef jelly.
If the chosen form of rigid, then for a few seconds, lower it into the hot water,

and flip the contents onto a flat plate or tray.

That's all the wisdom, beef jelly is ready. And the only thing to it is not enough, it's hot mustard, sweet-scented horseradish with beets and fresh rye bread.
Enjoy your meal.