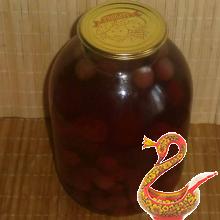 Summer. It's time to fruit and berries in a myriad of what other products that are available all year round, invisibly sidelined. And this is understandable.

But the initial saturation of already passed, a bucket of strawberries, and with it the cherries already eaten (that's how most doctors recommend to spend the summer on the prevention of winter colds and infections), and we begin to think about conservation. And if the jams from different cultures is more or less clear, with a compote of fruit and berries is not so clear. Someone who likes fruity sweetness in a small amount of liquid, absorbing the fruits of Mother Nature, while others (myself among them) prefer drinking fruit drinks. A kind of natural response restored juices and fizzy drinks. So today we will make a simple compote of cherries.
For this we need the very sweet, ripe berry. About 500 grams per three-liter jar. How much roughly? You'll sort through it, to separate the tails and half a kilo to, not equal to half a kilogram after. So always take a "spare", can not go wrong.

Just need a simple water at the rate of 2.5 liters per bottle

and 120 (a little more than half cup) of sugar. That's all the ingredients.

Well my cherries thoroughly, separate the tails are sorted from the mint and just suspicious (we do not want to compote of cherries in a few days dimmed and exploded), and go to sleep in a jar. More precisely on the banks, because surely you all this "mire" not for the sake of one bottle of cherry compote.

Fill with boiling water and set aside. Jars with compote of cherries should cool completely, so the six ... eight o'clock about them simply "forget."

Time passed quickly (even in the summer it is chronically short). Drain savory compote of cherries and Boil it again.

Meanwhile, in the banks with the remaining berries, pour sugar,

pour over a savory compote of cherries and roll up. Turn jars upside down. So you can see for yourself how well you have closed the cover.

When banks are completely cool, wipe them out (accuracy and cooking compote of cherries - are incompatible, at least in my version), and remove them until the fall or winter. At least two ... three months, and better - on all three ... four. So the taste of cherry compote will be much richer and richer.

Enjoy your meal. After Bank of cherry compote frosty winter is the invisible straw, connecting us with the summer. Albeit very quickly ending.