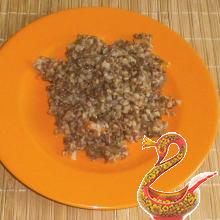 Most of us, especially those who are older, well remember the simple and unpretentious canned "Buckwheat porridge with meat" and "barley porridge with meat" mandatory were part of the diet and dry rations in many military units. But the thing, a thing of the Soviet era, the shops and supermarkets for its abundance of delight, and such simple canned completely disappeared from the market. And yet it is a very balanced diet, everything else is included in the number of easily digestible. It's no wonder nutritionists army (there were some) strongly recommended it as a regular diet.

So today we will make a simple, even a very simple dish - buckwheat corned beef.
And we need to cook what that oil or fat. But do not hurry to pour sunflower, olive, or put a piece of margarine or butter. In each jar with stewed meat, whether it's beef, pork, poultry, or even horse meat, there is always the top layer of natural fat. He then we need the. Spread it into the large cauldron with a lid and set on fire.

A cauldron until the fat is heated, clean and my one medium onion,

and finely chop it.

Spread it in the cauldron, and stir fry for about five minutes.

And until the onion is fried, one large (can take two, "not to spoil the porridge oil") carrots clean, too, my good,

and send to the onions on the same five minutes to brown together already.

Now lay the stew itself, break it into small pieces and simmer all together for five minutes ... seven.

and send in the cauldron. Two ... three minutes will suffice.

Add buckwheat. But how to take it? Simple trick: a jar in which it was stew, measure exactly the same cereals. This simple technique that I suggested to the army cooks allow very precise dosing and not to be mistaken with the proportion.

Spread it in the cauldron, and literally two minutes ... one fry. Since buckwheat does not become "weakling" and will remain so beloved by many crumbly and dense. Although if you are not one of them, just pour water.

This bank stew it need about 400 ml. Reduce to a minimum the fire and tormented buckwheat corned beef. And do not forget to salt it, without top teaspoon will be enough. But add black pepper and other spices - decide. It all depends on your tastes and habits.

After 20 minutes our buckwheat with stewed meat ready. As you can see, is really nothing complicated.

And let our interpretation differs significantly from the classical version, it's much tastier. So prepare this dish and you, the more time that it took only 40 minutes.