Мучные блюда / Dumplings with strawberry recipe with a photo

Dumplings with strawberry recipe with a photo 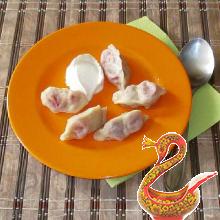 Dumplings with strawberries I have never received, as I did not want it, and how many did not try. And the whole point of the berry, "plastic", which is in supermarkets all year round, I have no respect and never buy, and one with the local golf goes very short time - too sweet and very juicy. And dumplings with her just sprawled More at modeling, not to mention the cooking or serving.

But one day, I received a revelation: what if previously frozen berries? What will come of this, and what dumplings with frozen strawberries would taste? And tormented assumptions, I decided to cook all the same.
So the first thing I started with strawberries. Berries my,

torn off tails and put to freeze. My wife saw my male approach "all in a heap," and made his own way, Lay one layer berry to berry. So I get really great: not only so they froze faster and sculpt dumplings then was much easier. But in any case, four ... five hours, she freezes, so this recipe is stretched in time.

From all this, knead the dough,

and leave it for an hour "rest". Generally this amount of dough turns 65 ... 70 dumplings, so if you want to cook more or less, calculate the proportion of yourself.

Put to boil water. Many since then they just do not stick together, and will tselenkimi. And put a good pinch of salt, so you do not forget.
Getting directly to the modeling of the dumplings with strawberries. A piece of dough in volume as a tablespoon, roll out into a thin cake. I have this little skalochka of child recruitment, which is a perfect fit among the most popular items in the kitchen. You can do this any large rolling pin or even a glass bottle. The only thing - be sure priporoshit flour table or a plate, on which will roll out the dough.

Stack two ... three berries (make sure in practice than they are smaller - the easier it is to mold)

zaschipyvaem and the contour of a dumpling. One down, so do the rest.

And it is important to: keep only the ones you cook and eat immediately, remove the remaining back in the freezer. So dumplings with strawberries not raspolzutsya and remain tselenkimi.

Throws them in boiling water, stir once to dumplings do not stick to the bottom, and after re-boiling water, pinpoint five minutes.

Rather, they serve and eat as they cool down very quickly.
Enjoy your meal.