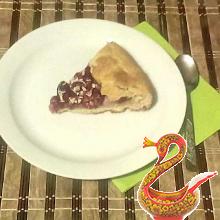 When I caught the eye of the recipe for this cake with cherry village, it did not attach any value. Well, really, everything is a snap, and even just, I decided, and set it aside "for later". He did the composition of ingredients, neither the technology nor the name, did not cause macabre curiosity, forced to go straight to the kitchen.

But one day, it happened, 600-gram package of frozen pitted cherries, prudently bought in a supermarket, has been forgotten and left lying in the trunk. And when a few hours later I'm talking about it all the same thought, it was too late: he did razmёrzsya, which means that something urgently from it, you must prepare. And as the time on the clock is approaching midnight, to go though in some store just did not have the desire, the ingredients were limited to what was home.
Therefore, except for the cherry,

which has already razmёrznutsya (fold it in a colander to excess juice glass, and our rustic Cherry Pie is simply not "floated"), you'll need:
• half cup of wheat flour,

• one egg, to be exact - only protein from it

That's all that we need to prepare the village of cake with cherries. Getting.
Both flour, salt, sugar and half the volume of the butter, mix into a homogeneous mass. I did it just hands, and you can take a mixer or whisk. But just as it is - an ordinary shortbread dough exclaim experienced housewives and will be absolutely right. But do not rush to conclusions,

since the trickle continuously disturbing, add water. You should have a solid, almost sticky ball that is 15 ... 20 minutes, put in the refrigerator.

Starch is mixed with the second half of sugar.

At 200 degrees oven set to warm, and in the meantime We reach the dough from the refrigerator and in the form of (preferably soft silicone) with high edges flatten "cup."

The starch and sugar mixture add protein and well knead.

Pour into a form of Vishnu,

and folded the edge. Get more "cheesecake with a cherry." 45 ... 50 minutes to put it baked in the oven on the top shelf.

That's all wisdom, our rustic pie with cherries ready.

But do not take the time to file and have it immediately (the more so because it is still very hot) and let it stand for half an hour. Believe me, this will only tastes better.