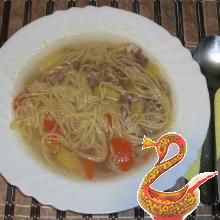 The main ingredient of noodles with pheasant, the bird itself, I got from my uncle-hunter who with a gun in his hand trying to spend all weekend long. He also told me how to cook it.

Since this phase - absolutely wild, produced in the forest, and has its own characteristics in the preparation of venison. Therefore, this dish - not my impromptu or years of experience, but on the contrary, full implementation of his instructions and recommendations, which I want to share with you.
So cook pheasant broth. In the three-liter saucepan pour half carcasses, weighing about half a kilogram of poultry, a liter of water and set on fire. When it comes to a boil, boil for about five minutes and drain the water. So peculiar smell go away, and our noodle soup for pheasant, will be quite transparent.

In the same pan to cook again put a pheasant, but now fill it with two liters of water, add one medium onion bulb (if you want a darker broth - do not even need to clean it)

a teaspoon of salt with the top,

and a half ... two hours after boiling, "forget" about it.

Boil the broth, covered, over low heat.
When the allotted time comes to an end, clean three medium potatoes,

thick and cut them into strips.

and cut into thin circles halves.

Now take out the pheasant cool, and we filter our own vegetables in broth. Onion, bay leaf and black pepper its taste and aroma given, and we have them still will not. Put the stew again.

Meat disassemble, throwing the bones and skin. You can cut it a little bit, then it was more convenient to have it.

and boil together another three ... five minutes.

That's all the wisdom of pheasant noodles ready. And as you can see, no intricacies and complexities in this recipe simply does not.

And finally, a small but very useful practical advice: if you do not cook it pudding for a large company that will eat it at one time, then just stop at that point when you need to add the noodles. After all, it can be done the next day, and our noodles Pheasant not to lose its clear and saturated color, and the dish will not turn into a nasty flour paste. Now just all enjoy your appetite.