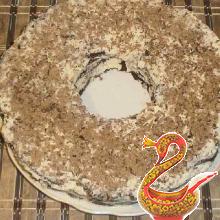 Bird's milk in the form of ice cream, sweets and cakes purchased, I have always loved. Moreover, the same ice cream, I learned to cook for themselves, and whenever there is a possibility, I do it myself.

And if the candy I never thought to prepare myself (though - everything is possible), the cake for me and it remained impossible dreams. Until that moment, I did not fall a little, pretty yellowed (scary to think how old he is) leaf,

on which was painted very sparingly (if I may say so), his recipe. And experience has shown that it is very unusual cake Bird's milk, as a cream for it - not the usual souffle and cooked it on an ordinary ladle. The very fact that our mothers and grandmothers cooked us a child.
The first thing ispechёm cake. But even before you start cooking, for 190 ... 200 degrees put Preheat the oven.
Three chicken eggs (do not share them on the yolk and white)

with a glass of sugar,

whisk in the lush smooth.

Add a cup of flour,

two (I put two and a half, I love all chocolate sweets as much as possible) tablespoons of cocoa powder,

and a packet (200 grams) of softened butter. And even though the recipe was listed margarine, worse from this improvement, he just will not.

and all together again mix well. You can do it manually whisk mixer can be, but I prefer to do these recipes by ordinary electric drill. And though such an option many seem not quite appropriate, and eggs, and cream, and even more dough, whipped quickly and well.

Was covered baking dish baking paper (or use a silicone), spread the dough and put it on the middle shelf of the oven. After five minutes (dough will rise more, so choosing the form, keep this in mind) to a minimum and reduce fire pechёm have until tender. I left it for another half an hour, and you check with a toothpick: Wet - preparing further dry - off.

Now let the dough for about 15 minutes ... 20 stand and walk straight into the oven, while they themselves continue with the cream.
Because high (300 ml) cup milk

To do this, the milk should boil, and then fall asleep trickle semolina and stir constantly so it does not become lumpy. Cook as usual porridge, which means - five minutes, then remove from heat and give it to cool.

Now with sugar (all the same tumbler)

and a pack (although better take a half, respectively 300 grams) butter,

whisk into a smooth cream cake for our unusual bird's milk.

The cooled cake cut into three (though maybe someone will turn and four) of the same formation. In addition, you will need 25 ... 30 mL of fruit liqueur or brandy for impregnation.

Cream divide into five parts (double the amount needed in order to smear him not only above, but also on the edges), and begin to collect: cake - impregnation (just do not get carried away, two teaspoons per layer will be enough)

Top can sprinkle it with grated chocolate or finely podroblennymi nuts.

But most importantly - now our unusual cake Pigeon milk six ... eight o'clock should stand and soak in the refrigerator. And that, believe me, the most difficult thing in this dish.

That's all, enjoy your appetite.