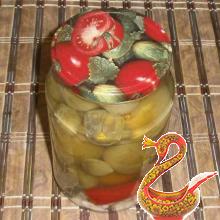 I do not know about you, but I have cooking canned green tomatoes is a synonym late autumn.

After all, would not be of the July-August heat, from which neither nowhere to hide or escape. After all, is not this year plenty of ripe, juicy and very tasty vegetables and fruits from which the shelves are bursting with market traders. And will not even "natural diet", because nothing else many simply do not want to. Here underneath it all canned green tomatoes, is a kind of hell, the total of all conservation in this season. And so the recipe itself should be very simple to use with a minimum of food, and cooking skills require very superficial. So today we will prepare canned green tomatoes, and you when the need arises, easily repeat it.
However, before embarking directly to tomatoes, prepare the brine. For this purpose, 100 ml of vinegar

and two teaspoons of salt,

pour half a liter (I take a little bit more, "with reserve") of water and set on fire to boil.

Meanwhile, the average head of garlic to clean,

but on the Big Island perchiny (although I take two, but smaller), cut green tail and take out the seeds. However, if you like witty - do not do it, and just have a good wash pepper.

Now do tomatoes. They are rarely the same size, without flaws and fairly clean. Most often just the opposite: in the land, all different, and a lot of them just goes straight in the bin. Therefore, they are not just my good, but we sort out. Otherwise, banks with canned green tomatoes you simply explode. They take the rate of one and a half pounds ... (it all depends on their size and how many of them you will discard) in two-liter cans. Puts garlic, pepper, and pour on top of the tomatoes had time to boil the brine.

Now almost ready canned green tomatoes should be pasteurized. Omit the banks into the water and when it boils, pinpoint half an hour. So canned tomatoes green color change to gray, and slightly reduced in size. And be sure to fold up the jar, because quite pungent odor of vinegar - not the most pleasant aroma in your kitchen.

Now close them tight cover, and at least a month to clean the cabinet. They can be stored at room temperature, but out of direct sunlight to protect. They are canned green tomatoes can be even more gray. And although the flavor will not be affected, in appearance, they have lost much.

That's all, enjoy your appetite.