Meat dishes / How to cook a pie with meat

How to cook a pie with meat 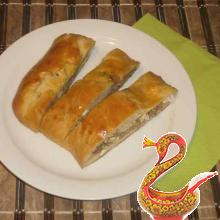 When I, as a young, heard the name "Kulebyaka with meat", "Kulebyaka cabbage" or even what kind of baking, always wary of this dish. Well, can not tasty dish called some byakoy, and that's it.

It took years, even decades. And one day the wife, wanting to cook something simple, satisfying, but it is very convenient that it was possible to take with you on a tour of the mountains, cook something. And to the question, what is it (try once with piping hot I was not allowed, arguing that there will be nothing to take with you), said, the easiest Kulebyaka with meat.
During a halt, snack, of course, I overcame my fear from childhood (I was already very hungry) and the first impression was even better than might have been expected. So the next day I stuck to it with questions and the finest details of the preparation of this pie with meat. But as the questions and answers were too many, it has become easier to cook again. And I see everything first hand and take pictures of all the stages of this. So another sacrament preparation pie with meat for me no longer the mystery of all. Your turn.
The first thing you need to heat 100 ml of milk,

dissolve in it two teaspoons of sugar,

and one - active yeast,

and leave them for ten minutes to approach.

and three chicken eggs with the milk and mix the yeast base.

About half a kilo of wheat flour (may have to add, depending on the consistency of the dough for our own pie with meat), sifted through a fine sieve. In this simple way we enrich the future of the dough with oxygen, making it even more gentle.

All knead, and an hour and a half ... leave our approach dough in a warm place.

And until the dough rises (do it better in the high-capacity, so it does not "escape"), proceed to the preparation of the filling.
One large (or two smaller ones) onion bulb clean from the husk,

and very finely chopped. Do not attempt this process "mechanize" onion juice and then let golden frying you "not to be seen as their own ears."

A deep pan pour a few tablespoons of vegetable oil and put it to heat up.
A few minutes later spread onions, and a few times to mix, fry it for about seven minutes.

Now the meat. Wife does not like a meat grinder, so I buy ready-made stuffing, you can also do otherwise. Although the taste of it and does not change at all.

Lay out his "contact" to the onions and immediately well interfere. Otherwise, then this "lump" is not fried, and leveled a pie with meat it will be very difficult. Seven ... ten minutes to bring it to half on low heat would be sufficient.

I forgot three chicken eggs to cook hard-boiled and cooled. But as the dough rises more, this "forgetfulness" is quite forgivable. And the rest - all as always:
• 12 minutes after boiling;
• Put a teaspoon of salt (to even cracked the egg is not leaked);
• Cool under running cold water;
• Clean from the shell.

The dough is well risen during that time. Punched him,

and divided into two parts, flatten it on the baking sheet. And do not forget to lay his baking paper to our Kulebyaka meat not wor.
And the dough is so pliable that it can be done simply hands, without any rolling pin. Just do not forget to moisten them with vegetable oil.

We spread the half cooked meat, flatten,

and close up, tucked the edges. So we get a closed (and unless there is a friend) Kulebyaka with meat. Also do the second and lubricates them to shine egg.
Again, my forgetfulness. The oven should be heated to 180 degrees, so you do not waste time on this expectation.

and cutting immediately; Ideas. Our Kulebyaka meat quite flat, and thus cools down very, very quickly.

That's all the wisdom. Enjoy your appetite.