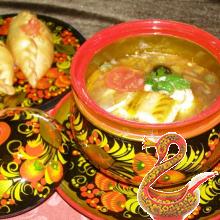 The cuisine of our ancestors did not differ so much a strong variety of dishes, prepared dishes that gave Mother Earth - pea porridge, bread, cakes with various fillings. A huge number of fish allowed to harvest it for the future - dried, salted. Processing technology products was due to the presence of Russian stoves. There was widespread first dish - soup, stew, zatiruhi. About this popular dish today, as a salad, in those days, we did not even know existed. Food never mixed and prepared them each individually. Then we have paid tribute to spices and condiments.

Attached to the Russian Astrakhan and Kazan land, and eventually Siberia, brought to Russian cuisine pleasant variety. Dumplings, manta rays, various types of noodles and even cinnamon, raisins, lemons, promoted the development of such an abundance of cuisine in Russia. There were sugar and tea, and therefore, had the opportunity to harvest in store fruits and berries.

During the reign of Peter the Great in the homes of the aristocracy becoming popular overseas get yourself a cook, Dutch, German or Swedish. The skill of the cooks left an imprint on the further development of Russian culinary art. In the late 18th century in Russia found shelter immigrants from France, fleeing the effects of the Great bourgeois revolution. Skilled chefs, they gave impetus to the development of foreign trends in Russian cuisine. They converted the cuisine technology - coined instead of Russian furnaces comfortable plate instead of pots and pans, even a meat grinder.
Began to open restaurants and gain popularity.

In the Soviet period, it has received a huge spread phenomenon of catering. Restaurants are fewer, and workplace canteens with the meager assortment more. Opened highly specialized companies - dumplings, barbecue, TASTE.

The next stage of development of the domestic cuisine associated with the collapse of the Soviet Union. As our lives become part shavermy, hot dogs, McDonald's. But, in spite of the dominance of fast food, love of fine, gourmet cooking will not go away. Our mistress of all ages continue to collect and store the recipes for complex dishes, pass on their experience to the younger generation.