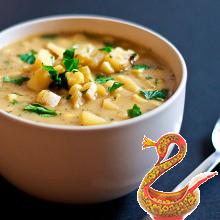 Have you wondered how to cook golden and fragrant broth? Here are some tips:
All herbs: parsley, celery, carrots, first cut in half and fry on one side only and without oil, then toss in the pan. Strain and pour in the broth broth husk 1-2 bulbs or put crude onion - surprisingly broth becomes amazingly beautiful and transparent.
Cover with water, cover, going to cook the soup, so it boils faster. Then remove the cover and reduce heat.
To salt remained crumbly and dry, put it in a few grains of rice, they absorb moisture.
If your broth is prepared for the filling or sauce should not add salt. Broth properly salted for 30 minutes before end of cooking. It is worth noting that the fish broth relies initially salting and mushroom as meat and, in the end. If the foam has fallen to the bottom, you need to pour a little cold water, and you easily you compile it with the surface of the broth.
Memo to the hostess:
If any part introduced raw egg yolk (milk, cream, sauce, soup, ...), it can not be heated above 80 degrees, or located in the yolk protein will roll and turn the mixture was heterogeneous. For the same reason, do not drive a raw egg in hot or boiling soup. It would be pretty tasteless, will roll into the ugly grayish threads. Pour it into a mixture of soup and citric acid, with the temperature should be below the temperature of the soup. Egg of acid will roll and not become rubbery acquire expressive color. In addition it is hard to float in the middle of the soup, but not on the surface Medusoid unknown species. This soup looks at five plus.
There is also a simpler method, before putting the raw egg soup, it is mixed with a small amount of broth, as in the first case little cooled. Egg evenly distributed over the broth.
Warm the broth over low heat, in an open pan, after boils remove immediately. He will stay longer transparent. It is not necessary to throw away the fat removed from the broth, it tastes sweet and very fragrant. It is necessary to evaporate water from it and use it for cooking. Especially good steamed vegetables cooked in this fat.
Containing acid sorrel and pickles, put at the very end of cooking, if you cook the soup with vegetables and potatoes, or potatoes acquire rigidity.
When you cook the chicken broth, for the acquisition of taste and flavor, put it lightly fried chicken bones.
Add a tablespoon of sherry plate. Your soup will become fragrant and acquire a special taste.
If you cook rice soup, so that it turned transparent, washed rice for a couple of minutes, put in boiling water, then strain.
It is not recommended to dilute with water salted soup, right to omit it from the cheesecloth pouch with boiled rice and pickled not boil.
When the soup is already in the stage of readiness, just before removing from heat, add to it a little bit of fresh juice of cabbage, tomato or carrot. It will enrich your soup vitamins and significantly improve its palatability.
Kvass can replace sour milk or yogurt divorced half boiled water when you cook hodgepodge. Also add a little citric acid.
To obtain yummy broth, use it only for water purified through the flow of water filters.
Категория совета:
Общие советы
Категория:
Рецепты супов
Похожие советы:
Варим полезные, красивые, вкусные и ароматные супы и бульоны.
Chicken soup with cheese rolls
Куриный суп с клецками с сыром
Tomato soup recipe with photos
Томатный суп рецепт с фото