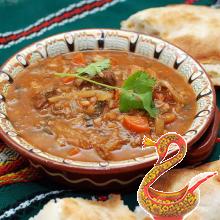 Soup kharcho native Georgian dish made entirely of beef, and on the basis of acid.

Why beef? - You ask. Yes, because the Georgian language kharcho sounds "dzrohis hortsi harshot" and translated as "beef soup." Also, in addition to beef, in kharcho must be present ingredients such as walnut and tklapi. For those who do not know what tklapi, explain - so the sun dried cherry plum puree in large cakes (pita). As required by this break off a piece of pita bread, soaked and drink. In this case, in harcho tklapi added. So, let's start cooking. We need, of course, beef - about a pound, we chop it into small cubes and boil for about two hours. After that, we filter the broth. We bring the broth to a boil and fall asleep rice, half a cup, along with pre-cooked meat. After 15 minutes of cooking, add the crushed walnuts - half a cup, passaged with flour onion, parsley root, bay leaf, coriander (seeds, half a teaspoon) and black pepper (pre-pounded). Glass soaked in broth tklapi rubbed through a sieve and add to the broth. Laying cilantro, parsley (green), hops suneli, saffron, paprika and salt. Boil for five minutes, then remove from the stove, simultaneously adding garlic (4 cloves), cilantro and basil. Practically, our soup - kharcho ready. Left cover it with a lid and leave to infuse for ten minutes. Soup should get thick and spicy. Bon appetit! Useful advice. Not always possible to find for cooking soup - kharcho basic ingredients. Basically, it refers to tklapi. But it does not matter. Instead, you can use tklapi not puree and very sour plum - plum (plum differently - tkemali). It on our soup will take approximately ten tricks. But acid soup you can control yourself - it depends upon your taste. The main thing that you must remember that the three components of the Georgian soup kharcho, without which it will not kharcho. First, as is already clear from the foregoing, it is - beef. Second - walnut. And the third - tklapi which may well replace themselves plum. Well, if you really can not find any tklapi or plum, then there may come to the aid of pomegranate juice. You can add it to the soup for five minutes until tender.