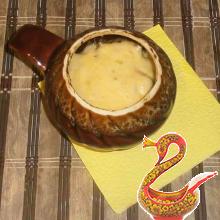 Julien with mushrooms I always called very simply - baked mushrooms with cheese. And prepares it often enough, as many would say, "eyes closed", with no pomp of did not. Dish as a meal, and all that. Moreover, I've never done it in portioned cocotte, and always baked in a great shape, which then filed.

But one day, while visiting friends in the country revealed that like to eat, with everything, and the only store in the area has been closed. And since no one wanted to go, I had to cook from what it was.
And it was, I must say, quite a bit:
• pound mushrooms,

• salt and vegetable oil. Ideally - a couple of tablespoons of thick cream, add the milk, or use it instead of drinking cream. I also have not proved to be ready, as you recall, at a very poor choice, but it turned still very tasty.
Onions clean and very finely chopped. But do not try to mechanize the process in a variety of electrical kitchen helpers: Onion let the juice, and then golden frying you will not ever achieve.

Pour into the pan, two ... three tablespoons vegetable oil, heat it well, and then spread the onions. Several times to mix, fry it until it begins to acquire a golden color.

And until the onion gold, my mushrooms under running water and cut into thin slices.

We spread the mushrooms to the onions in the pan, and stir. Stand out a lot of water, so do not fry under the lid on medium heat. So they not only protushatsya, but the main liquid simply evaporates.

Cheese rub on a coarse grater. In the semi-finished mushrooms (five ... seven minutes it will be enough)

And in a minute pour the warm milk. It boil? Salt, mix one last time and set aside reach.

To the maximum set to heat up the oven. Ideally - is equipped with a grill, because all the components of our Julien with mushrooms is fully ready, it remains only to bake. But if you do not have suitable small high skovorodochek - it does not matter. Make our julienne with mushrooms in small pots. Spread it

fall asleep on top of cheese,

and three ... five minutes bake. We serve immediately, as it cools down quickly enough.
That's all wisdom, our julienne with mushrooms ready. Enjoy your appetite.