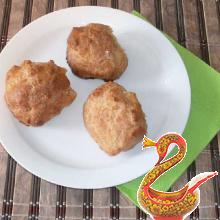 That's really never thought that ordinary eclairs, in my kitchen, I make up my mind ever prepare yourself. After all kinds of pastry shops, shops of sweets and a cookery departments in all supermarkets - a dime a dozen. And the choice they have always eclairs.

But one does not even got the recipe and so retseptik that fits on all four lines copybooks, recorded a very beautiful handwriting kalligrafichnym many years ago. Author of course I'll never know, but the shadow of a doubt he's well-planted. Thinking internetnym supported by photographs, and "finished off" me, my wife. Wherein in response to voiced my thoughts in the affirmative, that it was preparing eclairs at school at lessons of labor back in the seventh grade, and yet she turned just fine. It was therefore decided, today I prepare this delicacy. And in order to approximate it to the man's vision and implementation, I will not use shpritsёm confectionery, and will pretend that I simply do not have. This option currently conditions "close to the fighting."
So, the first thing you need to cook a can of condensed milk.

Everything as always: in a pot, the lid, the water completely covers the bank on low heat after boiling, about two ... two and a half hours. However, if you like a dark cream, then increase this time in half. And do not open it as soon as you would get out of the pan, and let forty minutes ... an hour to cool down. Although if for you it is very difficult, then just buy a jar of condensed milk is already cooked.

In addition, we need butter. A lot, since you need 400 grams of cream (it must advance from the refrigerator to make it softer), and for each batch of eclairs (I had the cream of three), 100 grams more.

There will also be needed eggs at the rate of four pieces per serving,

and the same glass - wheat flour. And for especially meticulous say that this - 170 grams.

And of course - a good pinch of salt. That's it, start making our eclairs.

At 190 degrees set to heat up the oven.
Bring to a boil the water, her divorce in butter,

and when the water boils again, gradually, constantly interfering, add flour. The dough turns steep, so the male power in this case will not superfluous.

Turn off the fire, and one by one, add the eggs, and without stopping, all the time interfere. Ideal to help another man: while one prevents the dough, another drives the egg. Such a "kitchen tandem."

The dough is ready for eclairs.

Veiled baking parchment baking paper, spread the improvised balls (it is desirable that they were of the same size)

and 35 ... 40 minutes, at the very top shelf of the oven, put baked. They are one and a half ... two times increase in size, and eclairs formed inside the very chamber in which we are going to fill cream.

And while ready eclairs 20 ... 30 minutes cool, stir in the condensed milk and butter cream.

Now a small spoon decompose them cream ('ll dig up all the same small hole), and four ... five o'clock we remove our eclairs in the fridge. So the taste will be a single entity rather than "test separately the cream separately."

Of course, should water them with melted chocolate or any other sugary glaze, but we're doing a simplified, "male" option. So without it. And the fact that they get a tasty, there is no doubt, but just try to cook them. Especially since you yourself have just seen how easy it is.