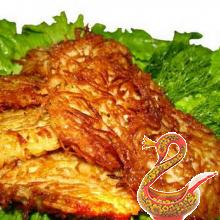 Potatoes - an indispensable product for any hostess. Due to the high carbohydrate content of potato is very nutritious, and its calorie content several times higher as compared with other vegetables. For example, a hundred grams of chips contains 192 calories. A rainbow of flavors of this wonderful product in different dishes know, perhaps even children.

Here are some interesting recipes potato:

Ingredients:
Young potatoes - five or six pieces
Olive oil - three tablespoons
Sweet ground paprika - 1/2 tsp
Kurkuma- 1/2 teaspoon
The mixture of herbs: oregano, marjoram and basil - 1/2 tsp
Curry molotaya- 1/2 teaspoon
Pinch of salt
Preparation:
Take a large new potatoes, washed thoroughly, using a sponge, spread out for drying. Peel not clean out. Cut into slices, then each slice dipped in olive oil, sprinkle with spices and put on a baking sheet, previously the laid foil and greased with olive oil. Spread slices necessarily cut up. The oven to heat to 200 degrees and place the pan on the thirty or forty minutes. Can be used as a garnish and as a separate dish.

There are many types of potato casseroles. One of the simplest is a casserole of boiled potatoes, as will take very little time to prepare if the potatoes in advance.
Ingredients:
Potatoes - four or five pieces
Olive oil - two tablespoons
Cheese - 200 grams
Mayonnaise or sour cream - to taste
Fish fillets - five hundred grams
Tomatoes 1-3, depending on the size
Pepper - one
Onion - one
Spices for potatoes - 1/2 tablespoon
Salt - to taste
Preparation:
Baking tins greased with olive oil. Clean the pre-boiled potatoes in their skins large, cut it into slices. Put the first layer of potato slices, top to put a little fried fish fillets (you can take hake fillets, pollock and other lean fish), sprinkle with spices, pour mayonnaise or sour cream. Top with onions, sliced ​​rings, slices of tomato and bell pepper slices. Put a second layer of potatoes, repeat alternating fillings, cover with cheese, shabby on a coarse grater. Put in a preheated 200 degree oven and bake until done (about thirty minutes).

Pancakes - a traditional dish of Belarusian cuisine, which requires a minimum set of products. Traditionally, they are served with sour cream, butter or mochankoy. Sauce, proposed in this recipe makes a variety of familiar dishes.
Ingredients:
Potatoes - five or six pieces
Sunflower oil - six tablespoons
Eggs - one
Wheat flour - a spoon with a slide
Onion - one large onion
Salt and pepper to taste
For the sauce:
Sour cream - 100 grams
Garlic - two cloves
Fresh dill - to taste
A mixture of dried herbs - 1/2 tsp
Preparation:
Potato and onion peel and grate on a fine grater or food processor to grind. In the resulting mixture to drive the egg and pour 1 tablespoon of flour, salt and pepper. Stir until smooth. Drain off excess liquid. Spread on a heated pan with a spoon to form a "cake". Fry until golden brown on both sides. Transfer to a plate and blot excess oil with a napkin.
Prepare the sauce:
In fat sour cream 2 cloves garlic minced through chesnokodavilku, add finely chopped dill and a mixture of dried herbs and mix.
Bon Appetite!