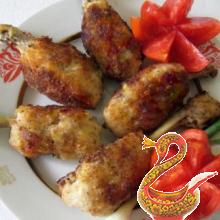 Crisp outside and tender chicken inside – one sight of these seductive russian chicken cutlets  hints true feast for the stomach! To enjoy these fragrant Pozharsky cutlets, cooking them yourself is imperative, because sold in stores are diggerent of their original flavor.

Reasons for Pozharsky cutlets cooking can be a lot – the desire to please the home on a day off or make more exciting meals during the week, surprise guests over the festive table etc. the Process of preparing this wonderful dish is not simple but it is definitely worth it. The rarity and historical value, and is a very important dish that Russians love to cook at home and restoranah.

History.
Recipe Pozharsky Russian chicken cutlets  was coined in the early nineteenth century by Evdokim Pozharsky, owner of the tavern in Torzhok. Chopped veal cutlets, prepared in his tavern, rightfully gained popularity among many travelers from St. Petersburg to Moscow. Ran the restaurant after his father's death, his daughter Daria was famous for "refinement" of this dish. Obviously influenced by the French tradition of meatballs, she begins to make them from minced chicken. And staying on occasion at the hotel Emperor Nicholas I praised this dish, than laid it Russian, and European fame.
Since 1826, a historical figure, passing through Torzhok, mention hotel of the same name and Pozharsky cutlets. At that time they were one of the most famous dishes of the tavern on the road between St. Petersburg and Moscow. Undoubtedly, the most important popularizer of the cutlets turned out to be Aleksandr Sergeevich Pushkin: "On your way have lanch at Pozharsky in Torzhok, fried cutlets try and go light."
One of the earliest recipes is this recipe from "the Almanac of groceries" for 1853 Ignatius Radetsky, professional chefs.
Pozharsky cutlets chicken naturally authentic recipe is :

Remove the chickens with the right amount of fillet, clear from lived, to chop up finely, put the butter in half fillet, mix with salt, a little pepper, and make moderate size patties, breaded in grated bread, then in the egg and bread, and fold in the melted butter in the skillet, and before you leave to fry on both sides until caramel and putting it in a dish, pour juice...

The recipe is not entirely clear to us, so decipher it step by step.
Do not use for cooking these cutlets are ready minced chicken, it is better to buy a big fat chicken and remove the fillets from the breast and legs independently. The skin should be remove as the bones. To prepare the stuffing can be 3 ways:
1. Grind meat grinder – 2 times through the fine lattice;
2. Grind meat in a blender to the consistency of buckwheat;
3. Chop meat sharp heavy knife. Recipe using chopped chicken fillet knife is much tastier, but a bit more complicated.
For hard-working chefs who strive to achieve the authentic taste of the dish given step-by-step recipe.

Separate the fillet from the bones
For real Pozharsky cutlets you wikk need these bones ffor "handy". Boil them, peel from  meat and cool. We will use them for molding meatballs.

Slice the fillet with a knife into small-small pieces (chop with a large knife).

OR fot SIMPLE way you GRIND chicken fillet in a meat grinder.

The rest of the ingredients are the same for both way of recipe:
For 800 grams of chicken meat you need:
200 g white bread without crust
200 ml chilled cream 20% fat
150 grams of frozen butter
half classic frozen loaf of wheat for breading
ghee for frying
salt

Minced pinch of salt. In a few receptions grate frozen butter, each time stirring the meat with a fork.

Put the meat in the fridge for 1 hour

Step 3
Frozen loaf grate on a coarse grater or cut into small strips and then brown in the oven at 160 °C, 3-4 min.

Step 5
Now roll the croquettes in a beaten egg

The last time, roll the meatballs prepared in our bread-sticks

Step 6
In a pan heat ghee and fry the cutlets for 2-3 minutes on each side.

Step 6
To cook Pozharsky cutlets on melted butter or mixture of butter and olive oil. Fry patties until Browning on both sides, then they need to bring to readiness in the oven, preheated to 160-180 degrees, putting back directly in the pan, or put them on with foil baking sheet. Bake in the oven  15-20 minutes  until readyness.

Remember: Pozharsky cutlets is best to eat immediately, but after warming up they lose all their flavor – the difference between a crispy crust and soft filling. As a side dish typically use roasted or fried potatoes, buckwheat porridge.

It is IMPORTANT
In order to Pozharsky cutlets were juicy and soft, have to follow important things:
It is best to use fillets from a whole chicken, including not only the breast, but thigh and the Shin.
Minced knead certainly with a fork, not your hands.
Do not  beat meanced meat!
The bread should be stale.
Not to fry the Pozharsky cutlets in vegetable oil. And do not be greedy foк melted butter !
Basic rules of cooking Pozharsky cutlets:
1. Cutlets have always been chopped.
2. Minced meat was always salted and peppered, and add to it butter — not a piece inside, as in Kiev cutlets, but stirring in meat. But bread soaked in water or cream in this dish was not added in the beginning. A Supplement appeared later, in 1989, in "Practical foundations of culinary arts" p. P. Alexandrova-Ignatieva.
3. The cutlets were "moderate size" as they say — the hand itself Darya Pozharskaya.
4. For breading used white (wheat) bread, grated on a sieve. But we are now used to seeing Pozharsky cutlets, dressed in small bread cubes. Where did that come from? Again — thanks to Alexandrova - Ignatieva. She suggested a recipe, where the breadcrumbs turned to  pieces of finely chopped white bread. Apparently this recipe came across one of Soviet chefs, which introduced the fashion for new Pozharsky croquettes in the restaurants of the Soviet Union.

And I have video for you. It is on Russian language, but you can understand everything from this step-by-step recipe.