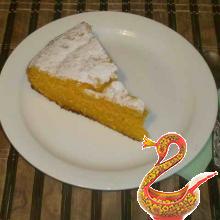 Homemade pumpkin pie – easy dish, the recipe of which is in the cuisine almost all peoples of the world. Not for nothing, after all pumpkin is a vegetable not only very useful but also relatively cheap, and make his meals – a pleasure.

To prepare this very simple but very delicious pumpkin pie, or as it would be more correct to call it, Rustic pumpkin pie, I really, really love. I use this recipe if possible, several times per season, because pumpkin (and this is the main ingredient) is on sale for almost six months. So today we have on the menu – very ordinary, a little rough, "rustic" pumpkin pie.

And to prepare it you will require:
• 900 grams (or so) pumpkins

• and a good large pinch of (this is important, otherwise the whites get whipped worse), salt.

That's all you might need.
The first thing for a couple, cook until tender (for me it took 20 minutes) the pumpkin. This is important because excess moisture it should not remain, but to do it in a steamer or in a colander over a saucepan with water – decide for yourself.

Pumpkin now needs to cool to room temperature (I separated from her a little more juice, which I immediately leaked), and then mash into a puree. You can do this with a mixer or blender "in the dust", but I wanted to make this pumpkin pie was a small pieces of vegetable (it is all the same village), so it is.

Now add to it:
• the egg yolks,
• semolina,
• wheat flour,
• baking powder,
and all together, well kneaded.

Whites with the salt easy beat well (blender resourceful this is a must),

and only then add sugar. Again whisk all together thoroughly,

and add to pumpkin-based pie.

Pour all into shape (I used silicone, so no grease it with oil, nor lay a baking paper did not have), and put in a preheated 190 degree oven, on middle shelf.

Bake for a long time (30 ... 35 minutes), and the usual readiness check with a toothpick that was not wet.
Take out of the oven and leave for 15 to 20 minutes to cool down.

cut off a piece, and with a fresh black tea (preferably with lemon) is served. And believe me, renounced supplements will not be exact.

Pumpkin pie has a long history. In Canada and the United States has a long tradition how to cook homemade pumpkin pie for Thanksgiving. It all began with the fact that European settlers came to the new world was first known about pumpkin from the American Indians. Once the settlers realized the pumpkin's versatility they began using this new product, both in sweet and savoury dishes. To cook first pumpkin pie, British chef remembered their traditional recipes and easy replaced encountered there pulp fruit with a pumpkin. Nowadays most  of us open recipe to prepare easy pumpkin cake that are filled from the top with a best mixture of pumpkin puree, eggs, cream or milk, sugar and spice (usually a mixture of spices, consisting of cinnamon, ginger, cloves and allspice). Homemade cake is pretty soft with this recipe , because the crust is not pre-baked, and the filling is put in raw form. The filling you make  while the crust will not brown color. Giving the cake to cool to room temperature, it is usually decorated with whipped cream and serve.

There are many recipes for best homemade pie crust, one of which you can read in our recipe, it imparts a lovely buttery taste and has a crumbly structure. Taste like pumpkin cake, you can do better if you sprinkle the unbaked crust with a layer of crushed ginger or pecans. This not only adds flavor, but will not allow the crust to be damp. After adding nuts, all that remains to do is fill it with stuffing. The main difficulty in the preparation of this homemade cake are related to the fact that the filling may crack, don't be alarmed if this happened. There are some tips that will help you to avoid a large number of cracks. First, the ingredients should not be mixed too vigorously, so I think that it is best to mix the ingredients by hand, not in a blender or food processor. Secondly, try to flip the cake out of the oven if the knife stuck in the cake at a distance of 3cm from the edge comes out almost clean. Don't be alarmed if you notice that in the center of the cake filling still looks raw, as it should be.
Americans prefer to make for best and easy recipe with filling of canned pumpkin, though, if the pie to make with fresh vegetable, it is a much more useful and tastier. The history how to make homemade and easy pumpkin pies and make pumpkin cake in America began a very long time. At that time it was still unconquered continent, inhabited by Indians and wild Mustangs, and the process of colonization had just begun. In those days the recipe for homemade pumpkin pie was not like a modern. The best recipe of making this dish was a pumpkin, the flesh of which is cut, mixed with honey and spices and returned to the place. The vegetable was baked not in the oven, but put into the fire (then of the furnaces in America were not) and baked until ready. Thus, pumpkin acted as the meals, and the role of the vessels in which this dish is prepared. But times change, and now the recipe is to make pie dough and pumpkin filling. It turns out very tasty sweet dessert which will decorate any holiday table. It easy can make even the young mistress.
In Russia, recipe of homemade pumpkin cake was also popular. It was called "chapels" and was made of sour dough in the pan. Chapels was a private pie was probably the "second" dish than a dessert. Its preparation takes longer than make a classic American pie, but this process is more time-consuming.