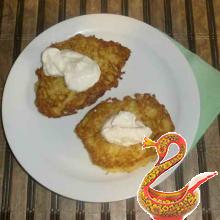 Someone highly respected say that the potato pancakes are the pancakes, and as the composition and preparation technology. And will be not quite right, because despite the fact that on appearance, both of these dishes are "one person", they taste quite different.

And my great aunt,  whole life has lived in Belarus (where, directly this is the native dish), renewed my confidence, and called two major differences:
• potato pancakes are prepared with regular potatoes, but the rubs on a small grater, almost "into dust";
• and they are prepared with onions.
So today my menu ordinary potato pancakes.
For this we need:
• eight, ten small (or three large) potatoes,

• and large, "masculine" a pinch of salt.

Oh yeah, I forgot: still need vegetable oil for frying these potato potato pancakes.
Onions with the potatoes peel and grate on the fine grater, which only you have at home.

Add flour, egg, salt and mix well all together. Raw (read – non-edible) potato fritters are ready, but left them to fry.

In the pan pour a little vegetable oil, put it on the fire, but only after a minute spread the potato dough. Fry on medium heat for three to ... five minutes (the pan is all different), not under a lid until education appetizing Golden brown,

Then turn over and fry for another the same. Repeat the procedure: pour vegetable oil (it is guaranteed to absorb, so every time have to update) – posted – five turned – off and so, until all the dough will not end. Moreover, it is noticeable let the juice out, so don't forget to pre-mix.

And so, as you can see our potato pancakes are ready, and to prepare them there is nothing difficult and all-wise, so "not shelving them" simply repeat this recipe. Believe me, you will not regret it.

For the first time a pancake recipe of raw potatoes was published in Polish cookbook in the 19th century, there was said about his German origin. To the Slavs the recipe came from Europe along with potatoes.

Hash Browns, potato pancakes, Jewish latex, Swiss rösti - different names for one dish. A symbol of Belarusian cuisine potato pancakes were not the invention of the recipe, and for the love of the public and promotion of meals. In Russia, the hash Browns better known under the Belarusian name.

Cooking options potato the potato pancakes a lot, every family has their own way of cooking pilaf.

The recipe is simple: raw grated potatoes, salt and vegetable oil for frying. That all has turned out, the potatoes should be grate well before grilling and to heat the pan.

Further possible options. If the potatoes are crushed on a coarse grater, then be sure to add a raw egg and a couple tablespoons of flour for every 500 grams of potatoes, then pancakes will fall apart when frying. You can add onion, garlic, pepper, minced meat or grated cheese.

Pancakes or pancakes with a stuffing – a separate issue. Shape them in the pan. First spread the cake "dough" thinner than normal pancakes, then the filling, about a teaspoon, on top of the stuffing and close the potato mass. The mince can be minced meat, fish, vegetables.

There is even a recipe for "granichnogo" of the batter. In its composition, grated on a fine grater raw potatoes, egg, milk, flour and salt. The mixture should be of such consistency that it would be possible to dip the chicken pieces, then fry on all sides. Bring a dish to readiness in the oven or under the hood.

If when filing next to the pancakes on a plate with slices of salted salmon, the dish ceases to be casual. Another festive option - ready pancakes baked in the oven under the heading of chicken, mushrooms and cheese.

The lack of potato pancakes or potato pancakes is high calorie. Make them low calorie is impossible, and here to facilitate you. For this part of the potato pulp must be replaced with chopped vegetables, and when applying the cream to replace yogurt. Part of the oil can be removed, if, after frying put the pancakes on a paper towel. But if undamaged potatoes thoroughly wash and use the peel, then increase the amount of nutrients.