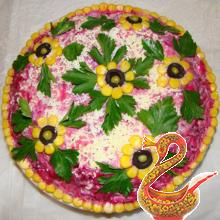 Few people know that traditional and loved by thousands of people pickled herring salad - "herring under a fur coat" has a political subtext. Invented this dish back in 1918, which, as you know, was a turning point for Russia. According to popular legend, "shuba" is not the name of the type of clothing, but the acronym.

Ingenious invention of the ordinary cook

Russian restaurants since the mid-19th century have been a favorite place of citizens. Here they drank, swore, talked and all the ways to find the truth. Often, the visitors beat the dishes, started fights, accused each other of harboring revolutionary ideas and discordant chorus sang the "Internationale." Once Anastas Bogomilov, a merchant of Moscow and the owner of several popular eateries have decided that it is necessary to pacify the visitors and to make its institutions more relaxed. It happened in 1918. One of the employees of Anastas cook Aristarchus Prokopcev decided that the easiest way to calm down the rebels is to fill their stomach. But not only so, but with a hidden subtext.

According to legend, it was Prokoptsev idea of creation  chopped canned herring salad recipe. Herring was a symbol of the proletariat (widespread, cheap and popular product), vegetables (potatoes, onions and carrots) represented the peasantry, and beets represented the revolutionary red banner. Popular French cold sauce "mayonnaise" served as a connecting link. Why was it chosen, is unknown. According to one version it was a sign of respect to those who made the Great French bourgeois revolution, on the other – a reminder of the Entente.
The Entente, which included France, was considered as the main external enemy of Bolshevism.
Why fur coat? SHUBA is an abbreviation which is deciphered as: "Chauvinism and Decline – Boycott and Anathema" which sounds in Russian like SHUBA - means fur coat. It sounds different in English, but you can believe me.

Restaurants visitors quickly appreciated the revolutionary salad. First, it was delicious. Secondly, inexpensive. And thirdly, it was a great snack for strong drinks. Due to the large number of Mayo people are less intoxicated, and therefore had less fights. For the first time in the menu of restaurants Bogomilova salad appeared before the new 1919. Maybe that's why "herring under a fur coat" and became a traditional dish for the Christmas table.
The history of the salad – a beautiful legend. How true is it, no one will ever know.
How to cook herring salad.

For most of us herring under a fur coat is strongly associated with family holidays, significant events or the celebration of significant dates. Meanwhile, to prepare this simple, tasty and hearty dish – simple. Don't believe? Will try to convince you the simple step-by-step Russian recipe in English, repeating which you will surprise even yourself, not to mention family and friends. That, together with you, and taste delicious chopped herring under a fur .

In order to prepare the chopped herring Russian dish, you'll need two medium salted herring. But take salted, strong-salted or smoked – you decide, technology and the sequence does not change.

and peel one large (or two medium) onion.

And to create the top layer, the "cap" of mayonnaise, you will need 250 ... 300 grams of this sauce. But don't take a light or fat-free, and take a real Provencal with classical 67% of fat. The gain in calories is very small, and on the final taste of herring under a fur coat such a "struggle for harmony", will impact very strongly. And alas, not for the better.

Peel the vegetables is easy, but thoroughly clean canned herring from the head, bones, fins and skin a little harder. But as a result of all of these "tortures" you have to get four identical half. And if to clean a herring for you is an impossible task, then use the finished fillets, four pieces.

Potatoes cut into small cubes. And to better razravnivaya in the bowl with the most vertical edges (a very desirable condition) – sprinkle vegetable oil, dessert spoons will be enough.

Herring cut into bigger slices, put on top of potatoes and flatten.

Onions cut thin half-rings, sprinkle with vinegar and lay on top of herring.

Carrot rub on a coarse grater directly into the bowl, resonate evenly on top and sprinkle with salt. Not zealous, two ... three pinches will be enough.

Now beets. Rub it, and just like all the previous layers, and flatten it evenly.

Now evenly pour on top of mayonnaise, five ... six times gently knock the bowl on the table, just to squeeze out the air, and put our herring under a fur coat in the fridge, six ... eight hours to absorb and share the flavors.

That's wisdom, now you have recipe in English and even with step-by-step pictures. Delicious chopped fish salad, in the preparation of which you have spent time less than an hour, ready.
Bon appetit.
Some more facts about Russian famous herring salad:
In the spring of 2010, the chopped herring under a fur coat made history: On Herring Day in Kaliningrad chefs prepared a record portion of chopped salad with a weight of 488 kg, with a length around the perimeter of 11.8 meters. It is known that for this dish took 50 kg of chopped salted canned herring, 98 kg of beet, 94 kg of carrots, 158 kg of potatoes, 720 eggs and 50 kg of mayonnaise. The giant herring under a fur coat worked chefs from six restaurants, and to try it are more than 4.5 thousand residents.

August 12, 2015 in Saratov was prepared chopped salted canned herring salad weighing 631 kg, were used 64 kg of onions, 110 kg of chopped canned herring, 120 kg of beet, 75 kg of carrots and 117 kg of potatoes and 1850 eggs and 70 kilograms of mayonnaise. This achievement was entered in the Russian Book of records.