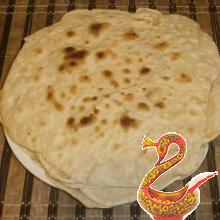 Homemade lavash bread is indispensable to wrap Shawarma and rolls as the bread of nature for vegetables as starchy additions to the kebabs. Ready lavash bread I buy quite often - packed in large packages . Then as today I want to show you thin bread recipe. And a little looking ahead to say that at me it very well turned out.

The only disadvantage of making armenian bread, is its size: most of us cannot  make a huge thin pancake at home, no matter how you try. But the rule "is better two small than one big" that apply here can be very useful, and the rest is just perfect, but the simplest dish. However, you just below can verify this.
In our recipe to make bread lavash at home, you will need only three ingredients:
• a glass of water,

• two and a half ... three cups of whole wheat flour. This "running start" in the amount you choose below will understand.

Of these ingredients knead the dough. No exact recipe will tell You exactly how much you need flour, but there is a simple rule: it sticks to the bowl? Add the flour until the dough ceases to be sticky, and will become one lump as in the photo.

Now wrap it in cling-film and at least an hour (even overnight), remove it in the fridge.

And for the next stage you will need iron "grandmother" pan, in fact, we are going to prepare our flatbread. Put your pan on fire, and make dough "sausage" and cut it for 10 ... 12 (depending on the size of the pans), parts, if You don't have tandoor, You will do like my photo.

Roll the dough flexibly, and so it doesn't stick to the table, powder it with flour. Moreover, the form in which you will roll out, purely a matter of your preferences: what you want to get the flatbread , so be it, it's in your hands. As seen in the photo I tried to make a circle flatbread , but not too successful in this.

Now you want to bake flatbread . We spread it on the already well-heated pan, and cook two minutes ... first on one side,

then turn over and dry him as much again.

Repeat the procedure as many times as pieces of the dough you want to bake. That's all we have prepared our flatbread at home.

But if you are going  something to cook with lavash, wrap a pile of flatbread in a towel, and "forget them" for half an hour ... an hour. So they will be more soft, flexible and not fragile and brittle.

I hope my lavash bread recipe didn't seem too complicated.

Where exactly happened thin lavash is not known, preserved only in legends. Recipe Armenian bread itself seems quite simple, but extremely tasty, not in vain because this aArmenian bread has spread around the world. In Russia people love lavash and everybody eat it. Though it is the national Armenian bread, but remember that not so long ago, Armenia and Russia were one country, the USSR, shared the sorrow and joy, and of course their recipes. Someone calls lavash is an ancient sheet of parchment, as in ancient times this bread is not inferior to the ancient manuscripts. Want to tell a little about the history of Armenian bread, which has more than six thousand years. Say the recipe since then has not changed, remained the same, which is not surprising given its simplicity.

The history of Armenian lavash bread
The place where now is Iraq, previously there was an ancient land of Mesopotamia which have left us a rich historical heritage. Thanks to archaeological discoveries we know that the Mesopotamians learned to bake their own bread from wild grains. Grains were meshed with a special stone ground into a powder in the flour, just mix with waterand this simple recipe of the dough they baked on big hot stones.
The name "lavash" comes from the ancient Assyrian language in the original is pronounced as "loash" and translates it as kneading dough, kneading.

For baking real Armenian bread you need a real oven "tandoor", which is now used for baking thin sheets of bread. The tandoor is built on the ground in the form of a keg or jug, the inner walls coated with clay to preserve the heat. The fire kindled within, and when the wood is burned, Armenian bread is clung to the inner walls of the tandoor. Get ready lavash from the tandoor special hand hook on a long handle. Traditional oven for baking lavash have different names in different countries. In Armenian it is "toner" , "tanur" in the Persian language, "tone" in the Georgian language, "təndir" in Azerbaijani language, and "tandoor" in India and Turkey. The same method of baking bread is everywhere in Central Asia, Armenia, Azerbaijan, Iran, Georgia, Turkey and the United States. Because of its simple recipe and ease of cooking have remained popular throughout the Eastern Mediterranean, Iran and the Caucasus since ancient times. Pita bread is also widely baked and sold in Hawaii in solid form.

Lavash is the most widespread type of bread in Armenia, Azerbaijan, Iran and the middle East. In Armenian cuisine, it is the basic bread that even take to Church on Easter, Azerbaijanis prefer to wrap the rice in a pita and eat with meat. Every mistress perfects the recipe of bread, for example, adds sesame seeds or spices that are so rich in the cuisine of the peoples of the Caucasus. While lavash bread is still hot, it looks like a corn tortilla pancake, but it dries very quickly and becomes crispy and hard - lavash cracker bread. For cooking lavash sandwiches or rolls with all sorts of soft pita bread jusr wrap it in lavash, soft flatbread is much better. But, crispy lavash can be stored, and if necessary, you can quickly return crispy flatbread to softness, without damaging the taste. In Russia, this bread is very often eaten with kebab.

Lavash is the easiest fresh white bread that is baked from wheat flour in thin tortillas. The shape of pita bread as a large oval binocolo 1 meter in length and about 40 cm in width, its thickness should be not more than 2 mm in the middle of the pellet, and a maximum of 4 mm from the edge. The surface of Armenian lavash is slightly bubbly, with brown (roasted) color of these swellings and palish color of the other surface. In this bread the whole mass is a delicious crust. Due to its unique properties lavash indispensable in a long journey, it never rusts.

To keep Lavash just wrap it in parchment, and dried lavash is easy again to make a soft, if slightly moister with boiled water and wrap in a plastic bag for one hour. Or another way of trying to hold bread for a few minutes over steam. Thin bread is very good with fatty meats, which are hard to digest with the usual yeast bread. To prepare the thin bread needs only flour, water and salt.

Our recipe showed how to divide the prepared dough into pieces and roll out thin, then bake on a large sheet. Immediately after baking, wrap hot bread in parchment that does not evaporate moisture, and the pellets remained soft, unless of course they will be stored for a long time, and You don't eat all the yummy pellets at once. For those who lose weight or adhere to special diets pita bread is indispensable, as it contains a minimum of calories.

Roll out the dough for the pita bread can be in many form oval or round and even square and also different can be the degree of Browning of the crust. The main thing is that should be a wheat flour, additives in addition to water and salt in this bread there is no.

The most popular types of fillings to wrap in the pita is the chicken, cheese, fish, vegetables and meat. In the East in pita wrapped kebab, kebab. Use pita  to make any roll wrap in sandwiches. And of course we all love the traditional Eastern dish of pita bread with meat and vegetables Shawarma.