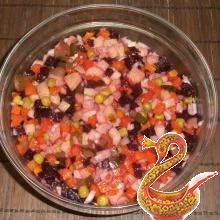 Don't know about you, but for me Russian beet salad "vinaigrette"  was always in the role of "poor relative", such is always simple and not always delicious salad which is prepared or in emergency cases, or for those who are fasting and on a diet. Meanwhile, the vinaigrette can be insanely delicious, if you follow a few rules that I was suggested my mom

Any component should not take precedence over the other, so just put equal amounts. After all, you make a vinaigrette, not beet or potato salad.

Cucumbers if you're doing with them and not with the sauerkraut should be salty, not pickled, otherwise the taste of the vinegar will dominate, and the vinaigrette will be just tasteless.

Canned peas should be young and tender, and not soup, wax ripeness. And preferably small, to please not only the stomach but also the eyes.

For the vinaigrette you need scented oil, not purified and refined for frying. And then you make sure that the vinaigrette is very different from what you ate until now, if you ever tryed it.

Do not leave the potato and beetroot salad for "tomorrow" and do not put it in the fridge. The taste will be worse at times, and the vegetables  in it  themselves will be "rubber".
And the last, vegetables, especially potapo andbeetroot,  are best when they steamed not boiled. Not only that, they can be cooked together without fear that the beets will stain the potatoes or carrots, and the taste will be deeper and more pronounced.
Lets begin to cook.

In order to prepare three or four full servings of the vinaigrette we will need one large carrot,

and three small potatoes. All this needs to be cooked.

In addition you will need two medium-sized pickled cucumber,

and one  (you could use sweet), onion.

slice cucumbers a bit larger, do not forget to press out of them the excess brine,

and the same cubes cut from peeled potatoes, remember - as less potato cubes as tasty salad

Potato mix well with carrot and onion in a large container, add 50 grams of vegetable oil, sprinkle with salt to taste and stir again. Do not leave vinaigrette for next day, otherwise the beet will color the whole potato in salad so immediately serve it on the table and eat.

The history of vinaigrette

Even historians find it difficult to accurately indicate the country of origin of the vinaigrette, but there are suggestions that the birthplace of this vegetable potato beetroot salad can be Germany or Scandinavia. Or rather no one can say, but it is known that already in 1845 in English cookbook was a recipe for Swedish beet salad with herring. It is very similar to the modern recipe of Vinegret, even more likely, "herring under a fur coat". In its composition were boiled vegetables such as potatoes and beets, pickles, grated Apple and egg white, and, of course, herring. And dressing served with mix of oil, crushed egg yolks, sour cream and vinegar.

The vinaigrette was liked by the residents of the Russian Empire. However, it is immediately modified and began to add into it  Russian sauerkraut  "kvashenaya kapusta" (favourite Russian dish), cranberries and salty crunchy pickles. So the vinaigrette has acquired native Russian features. But before, and now it is believed that the most important ingredient in the vinaigrette serves as dressing. By the way, one version of the origin of the name Russian vinaigrette  attached to his dressing. Say, French chef  worked in the kitchen of the Emperor Alexander, who once saw, how local chefs prepare a dish made with vegetables and sprinkled it with vinegar, and shocked cried: "Vinaigre?", which translated from French as "vinegar". Well, our chefs, not realizing the surprise of the French chef, under nodded: "Yes, vinaigrette, vinaigrette". And the name "vinaigrette"  was born for vegetable potato beetroot salad with a dressing of vinegar .

Whatever it was, vinaigrette accustomed to the Russian cuisine. But acquiring a "Russian character", it has not lost its charm, and our supplements have made it even more tasty and spicy. Modern housewives cook the vinaigrette with all ingredients, meat and fish, shellfish and squid, mushrooms and crab meat, add the plantain leaves, chicory, apples, beans, canned corn, mussels and even fruit. But remember that the filling should contain at least four basic ingredients: salt, black pepper, vegetable oil and vinegar. Vinegar, of course, you can substitute with lime juice or lemon, but do not forget that in French salad dressing called "vinaigrette", which means that without it finely chopped boiled vegetables will not be able to be called a vinaigrette. So, if you want to cook a "proper" potato beetroot salad, then, at least, to mix vegetable oil with a weak solution of vinegar, salt and ground black pepper.

But what and in what proportions, in addition to dressing, is the "correct "Russian vinaigrette""? Here everything is quite simple and difficult at the same time: this recipe simply does not exist. It is believed that this beet salad should be sour and not unleavened , and all the rest depends only on the talent of the chef. It's one of the very few salads, which do not follow the exact proportions. You can choose the ratio of ingredients according to your taste and combine them with other products. "Potato beetroot" salad sometimes even prepared with herring, pre-soaked in milk. In this case,  cabbage is not added to the a salad, and the number of potatoes increases. In General, mix in one dish is a lot... it Seems that this is why confusion is sometimes also called "vinaigrette". During the long years of culinary experiments with the composition and methods of preparation there are a number of recommendations through which you most likely can prepare the "Vinaigrette" that is sure to please your loved ones. These "secrets":
1. vegetables for salad are taken approximately in equal proportions;
2. all products should be cooled to room temperature (if you mix warm products with cold, the salad will spoil quickly);
3. to prepare the "Vinaigrette" do not use metal utensils;
4. it is believed that the salad is so tasty, the smaller chopped the vegetables;
5. the salad will be more tasty, if not boil the vegetables, and bake them in foil in the oven;
6. you should gradually mix dressing to the sliced vegetables, instead of adding directly (the filling should be evenly saturate all of the ingredients and not to swim at the bottom of the dish);
7. cooked beetroot is better to dress with sauce in a separate bowl – then the rest of the vegetables will not be coloured and the salad will look appetizing;
8. if you only fill beet salad with vegetable oil, it is better to salt the chopped ingredients in advance, as salt does not dissolve in oil;
9. prepare the "Vinaigrette" immediately before serving – store in refrigerator  not recommended.
Despite the fact that today is "Vinaigrette" is one of the most popular classic beet salads, the recipe is constantly changing: and changing the composition and ratio of ingredients. And now you can find the recipe for the "Salad", for example, with salted or pickled mushrooms, squid, bean... of course, everyone decides which recipe to choose: classic or original. And in order to provide you with this opportunity, I we gave you some unusual recipes for this salad.