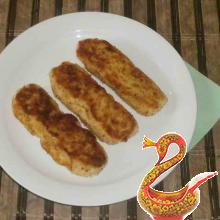 The preparation of these potato sticks with cheese was the consequence of the small pictures in the brochure of any cafe on the other end of my city. And when the eldest son read the title, and most importantly – the composition of this simple dish, looked at me with those sad sad eyes (just like puss from Shrek cartoon) that I realized that I'm certainly not backing out.

So I found the simple composition and basic recipe to prepare the potato sticks with cheese, and went with him to the kitchen.
And they are prepared really very simple, and from the minimum of products:
• five ... six large potatoes,

• 150 grams of solid cheese (preferably with a pronounced, but not neutral, smell),

And for cooking, will need:
• the pan for boiling potatoes
• the pan for frying,
• paddle for turning,
• flat plate for the slices with,
• Mash for potato,
• knife,
• Board
• spoon.
That's all.

The first thing put to boil the potatoes "in uniform". Nothing new, 25 minutes after boiling, under cover, on low heat, and then it must be cool and clean (in the following sequence, otherwise will burn).

It with flour, salt and eggs, mash into a homogeneous mass. As an option – all twist in a meat grinder or chop blender "into dust". Now potato our potato sticks with cheese ready.

Cheese. With him is even easier: cut into cubes rather short, thick one (don't use small pics) centimeter.

Turn sausages so that each was a piece of cheese

coat it in bread crumbs and spread on a pan, one by one. It is necessary to pour a little vegetable oil and place over medium, closer to a small fire.

Potato sticks you get a lot, not one at a time (I managed three), but does not need to "run ahead of the locomotive": don't stack them too tightly

and fry from all sides for two ... or three minutes. After all, the crunch of a delicious crust is as important as the taste of this dish.

Therefore, it remains to add only one thing:
Bon appétit.