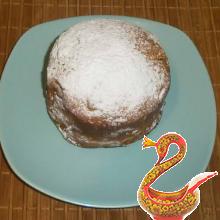 Russian Easter bread "Kulich" baked rarely - in the only Saturday of the year, on the eve of orthodox Easter. And for a few days (or maybe weeks) before him, many Housewives plucked countless recipes, choosing one of them, follow it. And not trying to deviate from the written and tested by someone.

Here I am, sleeves rolled up, on Saturday morning, having prepared Breakfast for the household in haste, drove them out. To avoid being disturbed (cat doesn't count, he sleeps all day, when is full) to prepare Russian Easter bread "Kulich", to be exact – several Kuliches , because if I goung to do so huge job there must be huge result.
The first thing I put the dough. In the microwave heated up a half Cup (100 ml) of milk, poured them into a large Cup 600 ml,

poured in it a bag of dry active yeast

a tablespoon of sugar and added wheat flour to the consistency of liquid sour cream. I got three tablespoons.

Stir and set to go. After about half an hour the dough has risen and even tried to overflow, but I had the foresight to put a Cup on the plate, and simply stirred the dough with a spoon.

After another hour it got up again, and I began to cook as an adult.

Two packs of butter (400 grams), which previously took out of the fridge and they eventually become soft, mixed with dough,

added the vanilla, and 2.5 cups sugar,

and 500 ml of whipping cream. Such as is used for whipping. All well mixed and put aside.

Ten large eggs (can take twelve, if average), divided into yolks and whites.

The yolks added to our dough semi-finished product,

and one kilogram of wheat flour, and knead the dough. And the cakes turned out to be more airy and not solid, "as the sole", the flour should not just put in the bowl, but sift through a sieve. This simple technique enriches it with oxygen, and the dough will be much softer.
The dough itself is still quite liquid and very sticky, but that's exactly what you need. Put aside for about an hour, let it rise. Everything was mixed in a five-liter pan, so the dough does not "run away".

150 grams of raisins seedless (I took 200, "oil will not spoil porridge "), filled with warm water. Not boiling water, as it will kill the vitamins, but not cold, as it will be a very long time to be melted.

From one large lemon

The hour flew by, and this is time to add  five whites, softened raisins and the zest to the dough.

Knead the dough and again put aside to come up. You have time quickly prepare a simple lunch, for returning children, eat with them and again put them out on the street.

The dough rose again during this time (about 1.5 hours), again knead it sightly and begin to sort shapes.

But before to start this exciting venture, warm up the oven to 210 ... 220 degrees.
Form for baking cover with a baking paper, the forms themselves are quite high, but the dough I put in them only to one-half (rise).
After the dough is laid out on the forms, do not rush to remove them in the oven, and let stand for a while and rise. 10 minutes ... 15 will be enough.

Bake on the middle shelf the first three minutes at great temperature, and then reduce it to 170 ... 180 and so bake another 35 to 40 minutes, depending on the size of the form. You cannot cook all this dough at a time in the oven, so then bake next part.
Take out the cakes and give them 20 minutes to cool.

Then just sprinkle with powdered sugar,  I don't like frosting, and  colored sugar powder.
That's all, Bon appetit. And believe me, homemade cake, made by hand, will be many times tastier than a takeaway. In fact, nothing like the sweet bread specific shape. And nothing more.