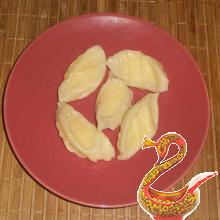 To say that vareniki with cottage cheese is my favorite dish, it would be a lie. This is not so. As a man, I like meat and fish. But ,  I have in the menu fermented dishes in General, dishes from cottage cheese in particular at least twice a week. And traditional Russian dish vareniki (dumplings) with cottage cheese is one option when you need to quickly and satisfying to eat something. So frozen, they're always in my fridge.

But compared to those that are sold in grocery stores and supermarkets and those that I cooked myself  is like the sky and the earth. Though they use the same cheese, the same flour, the same egg and sugar, not  mention the water and salt, in every large and small manufacturers. So what is so unique I put in them? I don't know, but that is not important. So today, once again, We'll prepare traditional Russian dish vareniki in your kitchen, you just repeate step-by-step recipe, and will be very pleasantly surprised with the result.

So the first stage, the dough. Actually, it's very simple, and it is no different from what I cook for different dumplings or ravioli. Take three cups of flour.

a glass of cool water, a pinch of salt,

and one chicken egg. Knead everything into a homogeneous mass. Knead with your hands  until it stops sticking to your hands. So we understand that the dough is ready.

Give it "rest" just putting aside, at room temperature, and meanwhile, prepare a filling.

mix with a half Cup (100 grams) of sugar. If the cottage cheese "lumps", grind it in a blender.

But add to it the egg or not, see for yourself. It all depends on the "dryness" of cheese, stuffing should not "float" and especially some liquid. It's so dumplings with cottage cheese just won't salapada, or will spread during cooking.

The filling is made. Starting to "marry" with the dough.

Of the total pinch off a piece of dough a bit and roll out with a rolling pin (hands not work, the dough is cool enough) in an impromptu shoot, the size of children's hands.

Teaspoon (ideal for stuffing) put it on our "pancake",

and pinch it in the middle first, and then the edges. So one varenik - dumpling is ready.

Left to stick another 59 pieces (namely 60 and the average is obtained from this amount of dough and filling). Flour a flat surface and lay out. Eat them immediately or freeze it – decide for yourself, but a "culinary assistance in the freezer" always help you to cook dinner or breakfast шт a minute.

Put them in boiling, salted water and once it boils again, cook for five minutes. And sour cream is simply necessary for vareniki - dumplings with cottage cheese . So they are not just very tasty, and unreal delicious.

Prepare them and you. Bon appetit.