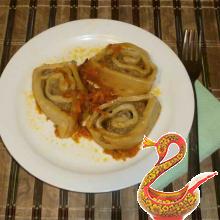 Names of this dish in the cuisines of various Nations and peoples "car and small truck". And, like many of us, I know them only through the Internet. But the most uncomplicated of them, lazy dumplings, was the very first and primary, which was in use at our house. When my grandfather, he shooed everyone from the kitchen, made them a huge number for the entire family.

Years passed, grandpa almost doesn't cook, and many relatives moved to another cities and countries. So today I'll make these lazy dumplings for a small circle – or rather, only for my  family.
For this we need:
• three high (250 ml) cups of flour

• and a teaspoon of salt.

All of this got mixed up a fairly steep, but elastic dough, and for at least half an hour (preferably longer, just wrap cling film), leave it just on the table.

• and a little ground black pepper.

Peel the onions, finely ("porridge") grind with blender, and mix with the remaining ingredients. The stuffing for the lazy dumplings is ready.

And we also need one medium carrot.

and grate (or finely chop, as you prefer) on a coarse grater.

Proceed directly to the moulding. Half the lump of dough (will be easier) roll out into thin layer.

Spread half of stuffing uniformly distributed by "pancake"

fold it into a tube,

and cut. Also coming with the second half. Generally this amount, which is enough for two pans, so you can cook straight away, or leave half in the freezer for the second time – decide for yourself.

Slightly (a couple minutes will be enough) fry the carrot,

even lazy put raw dumplings on this "veggie pillow", fill to 2/3 of its volume with water, close the lid and again put on the fire. When the water boils, reduce it to low and cook exactly 15 minutes, no more, no less.

Then switch off, spread on plates with the carrots, and serve.