Рецепты десертов / How to bake meringue

How to bake meringue 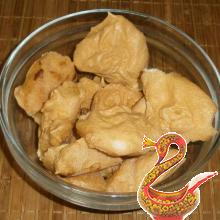 Meringue is the meal that is very difficult to cook, but the ingredients you want the most simple. I can't do it  too long: whites fell, it was the meringue was burnt, it just didn't rise and whites didn't rise. And from year to year, particularly at Easter, when, after baking cakes there was a lot of ыршеуы, I did not succeed to prepare a delicious, airy meringue.

But one day a witness to my culinary confusion was my aunt, who without going into details made a very brief verdict: "you're fundamentally wrong". And to the question "but how to do?" the reply was even more succinct: "I teach".
So today I was in the role of a spectator and the apprentice, and she was chef and a harsh teacher. And I very accurately recorded the experience, than I hasten to share with you.
Five eggs,

detachable whites from the yolk. To do this simply in two shells, or using all sorts of devices – you decide, but the fact that the yolk must not enter the whites, it is a fact. Or they just don't get whipped.
And whites should be chilled. So if you just brought the eggs in from the street – put them down for a few hours in the fridge.

Now the most important part – beating. Whisk is easiest in a tall narrow bowl, so measuring Cup from the blender is suitable for this can be very useful.
Whisk, as you already understand electric blender but not at top speed, leading them against the speed of the blender, the oxygen enriching proteins. And don't forget to put in a pinch of salt. So the whites will beat noticeably faster.
Whisk them until the mixture is very airy, and there is a simple test: while turning the glass upside down, it not fall, but remains in place.

Now add the powdered sugar, but to do this, turn on the oven around 160 degrees. Remove the baking sheet, it needs to stay cold.
Put the powdered sugar about half a Cup and again all is well, beat with a blender. The whites should not fall down, and the weight will not change in size.

Cover the tray with baking paper and spread a tablespoon of our cooked meringue. The distance between the cakes leave about the same as the size of the meringues, as they when cooking will increase in size.

So bake on the middle shelf (or browned on top or bottom-black) hour ... an hour and twenty, without opening the lid of the oven as the meringue is very doesn't like. Get, immediately unstick from the paper until the powdered sugar is frozen, and allowed to cool for two ... three minutes. Eat immediately, as the meringue is very strongly absorbs moisture from the air, and if left till morning, you run the risk of find unappetizing, misshapen ball of "rubber", which you don't recognise  delicious airy meringue, which you have prepared