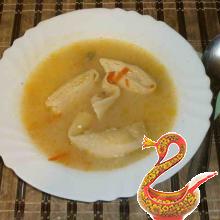 Not gonna lie, that this chicken soup with cheese rolls I had prepared many times, and have already "dog eat" on this recipe. On the contrary, I did it for the first time and didn't know what happens. But  the dish turned out excellent, soon I will repeat it with only one caveat: the dough should be rolled out even thinner, and cream cheese to take a more solid. And the rest is just perfect, so let's get started.

The first thing we need chicken broth. But from what to cook, or rather what part of the bird, everyone decides for himself. I cut off definitely the wings, remove the skin and put to boil in water.

In addition to the soup we will need:
• five small potatoes,

When the broth is boiling and has been optimally boiled a few minutes, drained the water first, only now add salt, spices, onion (just the husk, not cleaned, anyway then it will be thrown out), pour two liters of water and again put on fire. When it boils, reduce to low heat for an hour ... an hour ten, "forget" it.

Now, while cooking the broth, make cheese rolls. Cottage cheese (100 grams) put into the freezer, so it would be easier to grate,

and from cups of flour,

and a teaspoon of salt

knead the dough. It is 20 ... 30 minutes should stay to become even more elastic.

Aceive broth, meat and taxing, and everything else we would no longer need. Peeled potatoes cut into small cubes,

and grate the carrot.

Put the vegetables in the broth and again put on the fire.

Processed cheese, as mentioned above, grate,

from the dough roll out a thin "pancake",

The potatoes and carrots for seven minutes has been optimally boiled? Spread the cheese rolls and a small fire after boiling, cook for another ten minutes.

Pour into dish (if you leave in the pot – the whole cheese will simply flow out), and serve.

And now you know how to prepare this chicken soup with cheese rolls. Therefore, it remains to add only one thing – Bon appétit.